E1M4: Withered Gardens is the fourth map of the first episode in Return to Hadron. It was designed by Matt Powell (cannonball) and uses the music track "Under Death" by Mark Klem. 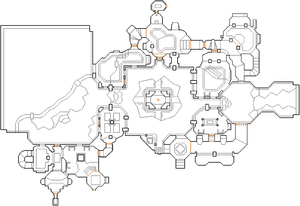 Map of Withered Gardens
Letters in italics refer to marked spots on the map. Sector, thing, and linedef numbers in boldface are secrets which count toward the end-of-level tally.

All three keys are present on the level and all are essential. You start facing a large building in the center. Visiting it is not required but it contains rockets and rocket launcher which will obtained later.

At the start, large enemy groups infect the whole area even on easy [[skill] levels. Start by picking the shotgun and armor in front of you. Slay all the enemies to make them not hinder you. After this, head left (west) and up the stairs. Turn left at the top and you will see a long building having two entrance doors. While the brown door will lead you to an optional room where you can access the rocket launcher in the mentioned building and secret# , the silver door is what you need now. Go there. You will come to a room where you can choose one of three other rooms to enter. The dark room in front of you is locked by barriers, so take the room to the left (east). Walk around the panel and you will meet a staircase on which you have to walk. Press the switch there, and you will unlock the barriers (but beware two shotgunners here). Return to entrance and visit that room (south). The blue keycard is right ahead. Take it and prepare for three enemy traps and two fast crushing ceilings. Exploit the crushing ceilings to kill the enemies and do not forget to gather items.

Return to the center of the map where you started the level. This time, take the route to the right (east) where a waterfall and pool are. Open the blue barriers to the left (north). Enter the room in front of you and to the right there must be a raised platform with the red keycard.

Get back to the water pool area (east of the map) and open the red barriers (south). You will arrive a hall with silver columns (spare the barrels for further fight). Reach the end of the hall towards the room with yellow keycard. Turn back and fight the ambush monsters.

The exit is located at the top north of the map. Since you have got the yellow key, you can open any of the three yellow doors on the level to reach the final room:

Once you arrive at the room with silver walls, enter an alcove where a switch will be. This switch lowers a lift leading to the exit door. Step on the lift when it is lowered and head through the door to end the level.