E1M5: Aedin's Castle is the fifth map in episode The Ruins of Parthala of Heretic Upstart Mapping Project. It was designed by Pillar of Salt and uses the music track "", a remix of the "Mist" track from Heretic. 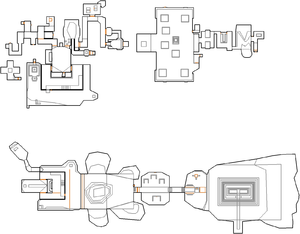 Map of Aedin's Castle
Letters in italics refer to marked spots on the map. Sector, thing, and linedef numbers in boldface are secrets which count toward the end-of-level tally.

Open the wooden door ahead and to your right to find some golems and nitrogolems around a sludge pit, then follow the walkway round to find an Ethereal Crossbow next to a lava fountain. Open the gray door next to the fountain and follow an N-shaped hall past some undead warriors until you reach another gray door, behind which you will find the green key guarded by two more warriors along with two sabreclaws. Take the key then step into the teleporter behind it to enter a large hall with blue pillars - you will see the yellow key inside a cage in the middle of the hall. Head east into an H-shaped room to dispose of three weredragons, then continue following the passages (which spell HUMP on the automap) east until you find a switch at the end of the P. Approach the switch (pressing it is optional) then return to the large hall where a crowd of monsters have been released, including ophidians, disciples of D'Sparil and two or three iron liches - get them to infight as much as possible, and use the Hellstaff in the north-west corner to help you. Once the room is clear, press the switch hidden behind the window in the north-west corner to open the cage holding the yellow key and pick it up.

With the yellow key, go to the door in the south-east corner next to a yellow gizmo and open it to find a teleporter, and possibly a Firemace as well. The teleporter will take you to an outdoor area with gargoyles and golems to your right as well as sabreclaws ahead - collect the Silver Shield in front of you then head forward until you see a switch on your right that will lower the lift next to it. Ride the lift up then walk straight forward (or turn right and go down the steps to find a Shadowsphere) then go through either of the yellow key doors to return to the starting area. Open the green key door in the north-west corner and follow the path until you see a wall open on your right and reveal a weredragon and an ophidian guarding a switch. Press this switch then go through the wall that opens behind you and turn left to see two undead warriors guarding a second switch, which will open a wall behind you revealing two weredragons and an undead warrior guarding a third switch. Press the switch and destroy the sabreclaws that are revealed behind you, then follow the passage they emerged from past two golems to a fourth switch; after pressing this switch, go back to the first switch to find that another wall has opened leading to a teleporter.

Run along the bridge in front of you to collect a Dragon Claw and ammo, watching out for the fire gargoyles and volcanoes on either side, then go through either of the gray doors (the left-hand door hides three Morph Ovums) and climb the steps in the next room to reach an outdoor area. When you move forward the wall in front of you will lower to reveal a large lava pool; prepare your artifacts before going on as when you approach the pool a large crowd of monsters will enter the area, including a maulotaur on thou art a smite-meister skill level or higher. Push on to the exit door at the other end of the arena and open it to find a switch that will lower the neighboring barricade, then move forward until you see the walls on either side lower to reveal another crowd of undead warriors, disciples and ophidians. Look behind the barricade to the south to find a switch that will reveal a second switch on the north wall of the arena, then press the second switch as well to raise some steps allowing you to vault the final obstacle and move on to the exit. At the exit you will find two Morph Ovums and a Silver Shield guarded by a maulotaur; kill it then press the switch that is revealed to lower the exit teleporter.

Drop into the sludge pit near the start to find a passage leading to a Torch and a Bag of Holding, along with a teleporter that will put you back on the path.

After getting the green key, backtrack to the top of the N-shaped hall to find a door requiring that key. The room behind this door contains nitrogolems as well as two switches; the right-hand switch opens a corner compartment with Crystal Vials and a Bag of Holding, while the left-hand switch lowers the platforms allowing you to reach two stacks of Ethereal Arrows and two Timebombs of the Ancients.

Pressing the switch at the end of the HUMP area will reveal a second switch behind you - pressing this switch will open secret #7 as well as two lava pits in the M area with a number of fire gargoyles. If you go back to the H area you will find that two compartments have opened revealing three Crystal Vials and two Morph Ovums.

Secret #2 can never be registered as the sector is too thin for the player to be recognized as standing on it. Consequently, it is only possible to get 11 out of 12 secrets in this level.

* The vertex count without the effect of node building is 1533.