E1M5: Caverns of Bazoik is the fifth and final map of Chex Quest. It was designed by Digital Café and uses the music track "". The par time is unknown as instead of having an intermission screen showing the par time it instead immediately cuts off to the ending text story. 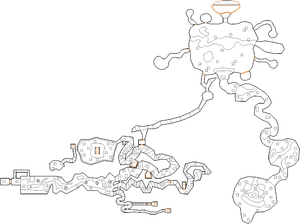 Map of Caverns of Bazoik
Letters in italics refer to marked spots on the map. Sector, thing, and linedef numbers in boldface are secrets which count toward the end-of-level tally.

Open door and head past the longing tunnel, turn left and get through a longer tunnel, maneuver over the tight sideways of the room at the end of the tunnel until you reach the yellow key, turn a 180 degrees, jump down below and head to the right teleporter of the middle pillar, go through the tunnel until you reach the blue key, once taken backtrack to the teleporter you came from and go across a small slime crack, open the blue door. Go through the tunnel behind it until you see a rocky door beside some crates, open the door and take the red key behind it. Backtrack to the first tunnel of the map and flow yourself down the slime flow, open the red door at the end of the tunnel and step on the teleporter pad behind it. Go left or right and then down a much longer tunnel, fall down the slime flow at the end, send the Flembrane back to its dimension and go towards the trapped chex people hostages.

You can use the first secret to skip the whole map straight to the flembrane battle.

* The vertex count without the effect of node building is 1753.

The Flembrane was originally supposed to have a map of its own, as there's a graphic for the next map's title simply called The Flembrane.