E1M5: Charon's Lab is the fifth map of Fava Beans. It was designed by Ben Gates. 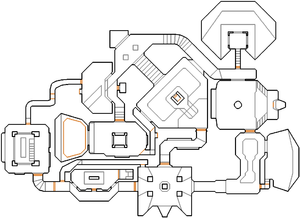 Map of Charon's Lab
Letters in italics refer to marked spots on the map. Sector numbers in boldface are secrets which count toward the end-of-level tally.

You start in a room with four pillars facing towards a door from where you actually came in and a shotgun. Take the shotgun. You will wake the former human and a shotgun guy in this room. Imps have already seen you. Eliminate them all. After that, head down the eastern corridor. In the brown room, turn left and open the door ahead. In the next room, you can collect a chaingun. Cleanup this room and take the stairs and press the switch. This will reveal a closet will red key and lamps with corresponding color (simple cosmetic walls). Take the key. Return to the very beginning.

Now, take the red door west. Go down the corridor, eliminating monsters, until you meet an UAC door. Open it and enter another door (green) to the next room. Right in this room is the blue keycard. It resides on the panel west of this room. Take it. Take some items you want.

Now when you have taken all necessary keycards, return to the beginning and take the door to the north. Go down the corridor and open the blue door at the end. In the next room, you can see a large tall pit in the middle. Do not fall down; there is no escape. The exit is right in the center above of the tall pit and is inaccessible. You need to press the switch to raise the bridge.

Go to the other side of the room and descend on the stairs down. In the room below, turn left and proceed further to a door leading to a dark room. There, turn left and enter a narrow alcove where there is a lift. Take it and go forth until you meet the switch on your right. Press it. Now, backtrack to the exit room mentioned above. Now, the bridge is made but the inescapable pit is still present. Be patient. Walk around on the bridge and open the exit door behind which is the exit button (and an imp on UV and Nightmare!).

A multiplayer-only berserk (Thing 113) has no flags set for any of the three difficulty classes, so it does not actually appear in the level.