E1M5: Engineering Bay is the fifth map of Knee-Deep in the Dead in Doom the Way id Did. It was designed by Jacob Zuchowski (ellmo) in the style of John Romero. The par time defined in the DEHACKED lump is 2:00. 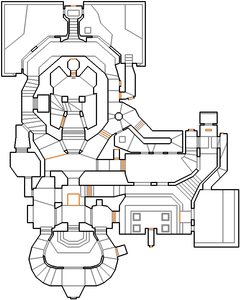 Map of Engineering Bay
Letters in italics refer to marked spots on the map. Sector numbers in boldface are secrets which count toward the end-of-level tally.

Take either staircase down (the left one leads to a chaingun so you may want to take this path). You cannot open both of the doors here yet, so use the lift and go up to a junction. Directly in front of you is the red door leading to the exit, but for now, take either side path going north. At the northernmost end of the map you should find some steps leading to a switch. Flip this switch, turn around, and take the path with the lift. Go up the lift, and you should see on your left a new passageway. Follow this passageway all the way to get the yellow keycard. Once you get it, backtrack to the first lift you had used. There should be a yellow door to your left, and there is also another one below the lift and to the left. Take either door, and if you are on the upper floor, drop down. Press the switch here, revealing columns with imps around you as well as the next switch. This one raises some stairs on the upper floor. Take the nearby lift up and go to the next hall to a switch with two left. There is a switch behind this one that lowers the right lift to a secret. The one in front lowers the lift on the left. Take this one, going across the field to the next door which houses the red keycard. Now go back to the junction with the red door path in the middle. Take the red door to the exit.