E1M5: Forest of Silence is the fifth map in episode The Dark Tower of Masters of Chaos. It was designed by Caleb26 and uses the Hexen music track "Deep". 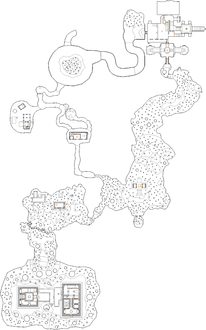 Map of Forest of Silence
Letters in italics refer to marked spots on the map. Sector, thing, and linedef numbers in boldface are secrets which count toward the end-of-level tally.

The south and east sides of this level are packed with tree trunks that conceal monsters and items, so remain vigilant and use the automap if needed. As the level starts, go straight forward to a stone structure visible through the trees; the exit teleporter is on this structure, and a Dragon Claw can be found behind it. Once you collect the weapon, turn left and collect the Torch between the trees, then go south-west and jump up the green rocks ahead. At the top, head north-west to enter a gap in the wall leading to a dirt path.

Follow the path to a wooden building which cannot be entered yet. Turn left to go around the building until you see a path going north-west and follow it, watching out for a wall which opens ahead to reveal weredragons and one or two undead warrior ghosts. When the path splits in two, go straight ahead to reach an area with two buildings, one wood and one stone.

Turn left and slay the undead warriors in the covered wooden area, then open the door behind them. Pressing the switch here raises the floor, but be wary of ophidians and ghost nitrogolems attacking from either side. Open the door next to the nitrogolems to find a teleporter which sends you into the stone building nearby. Press the switch in front of you, then step back into the teleporter and leave the wooden building. Return to the split in the path and go north, through a set of bars which have now lowered.

After passing the bars, press the switch ahead to lower a pillar with a Tome of Power. The path will lead you to a pit containing an island covered by a tree canopy; the green key is on a pillar at the center of this island, guarded by several golems and an iron lich to the north. Approach the pillar with the key and press the switch on its south side to lower the pillar. Take the green key and destroy the nitrogolems that appear around you.

With the green key, head due east to a wide river and follow it, destroying two nitrogolems on the way. You will arrive at another area with tree trunks guarded by undead warriors; turn right to see a brick wall with an archway, and go through the archway to enter a castle-like structure. Watch out for the disciples of D'Sparil firing at you from a raised ledge to the south as well as the golems and nitrogolems in this area; once they are dealt with, climb up two sets of steps to reach a door with a green key gizmo and go through it.

Kill the undead warrior waiting behind the door and turn right to see a Silver Shield, a Quartz Flask and an Energy Orb down a short passage; watch out for the undead warriors that ambush you from either side when you approach the items. Go up the nearby staircase to find an area with a pillar that has four switches. Each switch opens an alcove containing sabreclaws, and three of the alcoves also contain items - a Quiver of Ethereal Arrows, a Tome of Power and a Crystal Geode. Press the switch on the north face of the pillar to open an alcove behind you with another switch inside it.

Pressing this switch opens a metal wall to the east and releases a number of weredragons, along with a green chaos serpent. Slay them and climb the steps they guarded to find another switch at the top - press it, then backtrack through the green key door to find that a red pillar has lowered to reveal a teleport pad. Step on it to be taken back to the structure with the exit teleporter; the wood structures either side of it have opened. Each structure contains a chaos serpent, two Quartz Flasks and a Timebomb of the Ancients, and the east structure also contains the yellow key.

After taking the yellow key, head north through the trees until you reach a water pool. Enter it and follow the river north-east until you see dry land on your right; there are Claw Orbs here along with an Ethereal Crossbow. Go north-west through an opening in the wall, and follow the water here to dry land. Kill the waiting weredragon and climb the steps to a door requiring the yellow key.

Through this door is an orange room with a gray octagonal structure, guarded by four sabreclaws. Kill them then head west through a Y-shaped doorway, climbing the steps beyond it to a switch; press it and kill the ophidians that ambush you from the sides. Return to the gray structure to find it has opened to reveal some disciples, then head east through another Y-shaped doorway and press the switch at the top of the steps beyond. Go back to the gray structure and climb the steps which have risen, then step into the teleporter at the top.

The teleporter sends you to a previously inaccessible building near the center of the level. Go through the door in front of you, climbing the steps to a small room with a Hellstaff and two Timebombs. Go back down the steps and straight ahead to a room with a chandelier; press the switch here and open the door that opens on your left. Turn right and head around the building, then go south down a dirt path you used earlier. When the path ends and you have passed through a narrow tunnel, head due south to find a path between two pillars with blue key gizmos on them.

Follow the path to an open area and go straight forward to the green rocks ahead, jumping up them until you reach the top. Go west between two gray pillars, going forward until you reach a square rock platform with another gray pillar and four crystal vials. Just south of this platform is a tree with a tunnel running through it - go through here then turn left and follow the brightly-lit path south up a set of steps to a partially-destroyed building.

Go west around the outside of the building to its west side, to find a set of steps leading to a wooden door. Go through it, slay the gargoyles behind it and head straight across the room to another door, behind which you will find an undead warrior ghost on medium and hard skill levels. Press the switch here to be taken up to another door and go through to reach the destroyed wooden area of the building. Go east and drop into the pit below, then kill the weredragons on your right and press the switch they were guarding to open a door above.

Turn left and go round the corner, then open either door on your right to enter a seemingly empty room with a stone pillar. Ready your weapons and artifacts, then press the switch on the east face of this pillar to lower the surrounding walls and release several golems and undead warriors. Dispatch them then head south through the walls you opened to find a long dead-end passage with sabreclaws. Step into the passage and a staircase will lower; at the bottom of the steps, dispatch more sabreclaws then go through the north-east door to find a chamber containing the blue key, guarded by one or two undead warrior ghosts.

Take the blue key and leave the chamber, then go through the south door to get back outside. Turn left and head around the building - once you get to its north side, head north back down the large steps you used earlier. Go back through the tree trunk tunnel and look straight ahead - you may be able to see a wooden building on a raised platform through the trees. Go due east until you reach two gray pillars with braziers, then turn left and climb the green rocks ahead to the wooden building. Open the door on its east side (flanked by blue key gizmos), kill the chaos serpents and press the switch inside. Step into the nearby teleporter and you will return to the structure you encountered at the start of the level. The exit teleporter has been lowered - step into it to finish the level.

In the blue key building, a Silver Shield can be found in the western section of the building. After entering the building through its west door, turn left and go through the door ahead. The shield is guarded by two nitrogolems.

* The vertex count without the effect of node building is 16762.