E1M5: Highly Terminal is the fifth map of The Shattered City episode in Strange Aeons, designed by Impie in 2015 and constructed in Doom Builder 2. 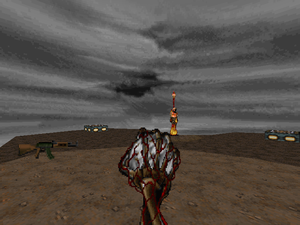 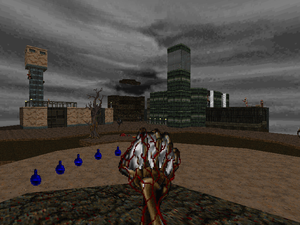 The control tower comes courtesy of a little map wizardry.

Kill the Devils having the barbecue and choose a teleporter.

The left teleporter leads to a lighthouse and a small army of Devils. The bridge to the lighthouse -- and its red keycard -- is lowered. The switch to raise it can be seen on a rock island off to the right.

The right teleporter leads to the main area, the airport terminal. Be sure to kill the machine gunners in the control tower and on the roof of the small outpost to the left. Go behind the outpost and blast the fusebox to short out the door and get inside, past a small Flayworm ambush. The switch on the roof raises the terminal stairs, but the terminal door is locked and requires the red keycard. Go left instead and leap onto the rocky cliff, then travel through the cave: you come out in the lighthouse area. Flip the switch and dive into the ether to reappear on the rocky island. Scale the lighthouse and grab the key, but watch for the Demon Wizard ambush.

Return to the terminal and clear out the waiting room. Don't forget the ammo on the outer platforms. Take the lift up into the tower and examine the control deck to raise the bridge to the exit slipgate and release more Demon Wizards.

From atop the lighthouse you can leap onto the small plateaus and gain some extra goodies.

A Green Armor is hidden between the terminal platforms, but isn't flagged as a secret.

From the lighthouse bridge switch cliff you can drop down to a tiny floating rock with an Ammo sphere.

Before jumping from the terminal to the cliffside cave, drop onto the narrow ledge to the right and grab the Soul Sphere.

Once you enter the terminal through the red door, go onto the left loading platform and drop off the left side for an ammo cache and Blue Armor.

Impie created the air traffic control tower by building it against a sky sector with lower ceiling level than the tower. The trick is obvious when the tower is viewed from certain angles.