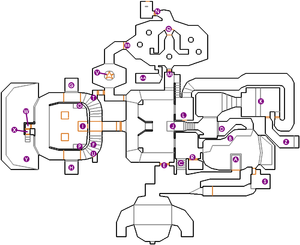 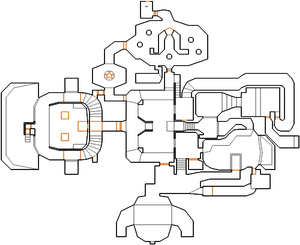 Run across the nukage pool (quickly, to minimize damage) and turn right down the hall. At the end, walk out onto the porch (A) overlooking another nukage pool; this will raise a walkway (B) on the opposite side of the pool.

Turn around, go back up the hall, and go up the staircase to your right (C). Walk along the walkway to the east, turn left into the dark passage, and pick up the yellow key at the end (D).

Go back down the stairs near the start point, and through the door to the left of the stairs (E). Follow the walkway around to the right, and you will see a yellow door on your left. Go in, take the lift downward, and turn left down the gray staircase (F). As you reach the bottom, two traps will open — one behind you (H), and one on the corresponding staircase to the north of the lift (G) — revealing four imps (I'm too young to die and Hey, not too rough), or eight sergeants, four imps, and two spectres (Hurt me plenty), or eight sergeants, four imps, and four spectres (Ultra-Violence and Nightmare!). Continue following this hallway around to the right, until you see a nukage pool on your right with two large columns in it. Run across the nukage, between the columns, and press the switch on the small concrete platform (I); this opens a door across the nukage pool from the yellow door. As you step onto this platform, the two columns will descend, revealing two troopers (ITYTD and HNTR), or two troopers and two imps (HMP), or two troopers, two imps, and two sergeants (UV and NM).

Go back through the yellow door and run straight across the nukage to the newly opened passageway (J). Go up the stairs, turn left, and follow the passageway to a computer room (K). Click the switch in the far right corner of this room, which opens a doorway to a darkened tan corridor. Follow this corridor to a gray room containing the blue key (L).

At the yellow key, some players find it helpful to shoot as many monsters as possible through the window, where their attacks are less effective (demons' in particular). The room beyond this window is the first room past the staircase on the way to the computer room.

After you lower the two green columns in the nukage pool, you can make them rise by walking onto one. This allows you to jump to two high platforms at the far corners of the pool, containing a blue armor (O) and a box of bullets (P). (If you are still on the column when it stops moving, you are not trapped: pressing the button on the east wall lowers both columns again.)

The switch near the blue key opens a hidden door in the small room at the bottom of the nearby staircase, across from the blue door. This provides a shortcut back to the beginning of the level (and is not needed for 100% secrets).

The dark room before the exit contains a large horseshoe-shaped wall in the center. The northernmost section of this wall (Q) is a secret door (which is not needed for 100% secrets).

If you ride the rising column toward the bullet box, you may notice a thin slime trail on the gray wall to the east (see screen shot below).

If you stand in the northeastern corner of the long tan corridor and look to your west, you may see a small slime trail (see screen shot below).

If you walk very slowly up the first staircase, along the left-hand wall, you may awaken an imp near the western edge of the computer room, despite the solid wall between you. This is an instance of the "sleepwalking sergeant" bug.

There are 12 known anomalies in this level's REJECT table.

The four spectres in the next-to-last room tend to be somewhat confined by the obstacles and slower-moving monsters around them; therefore, killing the first few zombies may actually increase your chances of being cornered.

Firing rockets in this area is rather dangerous due to the number of columns, barrels, and enemies present. In UV speed mode, however, they are the fastest way to clear the exit room (if your timing is impeccable, you can kill all three demons with three shots).

It is possible to press the exit switch while two demons are still in the room. (For this reason, secret #7 is sometimes skipped in a straight speedrun; the player can easily conserve enough rockets to clear the blue key room.)

For categories requiring 100% kills, the general practice is to enter the dark room from the south, then obtain the light goggles, which make the spectres much easier to see. Proceed clockwise toward the exit, pausing to collect secret #9 if necessary; if you go just far enough past the exit door to shoot the barrel in the northeast corner, you have probably awakened all the monsters. Some players use the chainsaw almost exclusively in this room, finding it to be more predictable than shooting barrels.

Andy Badorek, in his original pacifist recording [1], survived the final two rooms by luring monsters into the pentagram-shaped teleporter one by one. Later players greatly improved his time by opening and closing the western blue door rapidly (encouraging infighting), then running toward the exit. The fastest, but most dangerous, method is to enter the dark room from the south, go through the center of the horseshoe-shaped wall, then open the exit door: with luck, one or two demons are immediately struck by gunfire and charge past you, allowing you to reach the switch.

Due to the large population of this level, even a straight speedrun requires the player to obtain a shotgun and use it regularly. Most players also get the soul sphere, since there are so many zombies to run past. In an episode run, the blue armor is sufficiently important to warrant another detour, even in styles where the player already has a rocket launcher from the previous level.

This map contains a large number of barrels, columns, and somewhat crowded rooms, which make it difficult to use the rocket launcher. Compet-N players normally use it only in the long tan passage and the blue key room, and occasionally to clear the two green columns in the nukage pool. In NM, it is often used when the yellow door is first opened (taking care to aim at the side wall in an episode run, rather than straight ahead, so that the rocket does not accidentally detonate on the corner of the ledge and hurt you). In an episode run, the player sometimes has rockets left over from previous levels, and can therefore use them in the western area as well.

Uwe Girlich has suggested that the optimal route through the western area is counterclockwise [2], because several monsters in the southern part of the large trap are facing away from the player when it opens (and therefore do not attack immediately). Because none of the monsters in the trap are deaf, this tactic is most useful during pacifist runs.

In a straight speedrun, the fastest route to the computer room is through the yellow door. Expert players can run from the yellow door to the switch and back in exactly two elevator cycles (any longer and you have to wait one more cycle to get back up the elevator, a significant delay). In pacifist runs, or when playing with fast monsters, however, the western area must be exited via secret #3, because a cluster of monsters will gather on each side of the yellow door while you are inside. The partial invisibility powerup also helps you survive all the way to the blue key. In an episode run, some players go through the teleporter room anyway because it contains medikits.

In NM, according to Adam Williamson, the player should begin this level by:

Williamson says that this sequence forces the monsters into unusually predictable routes toward the player, making them a lot easier to dodge until you climb the stairs. He credits Drew "stx-Vile" DeVore with inventing the trick. [3]

NM speed and NM100S runs use essentially the same route, with minor detours to collect the secrets in the latter case (though secret #2 is almost always entered). The level has been completed in both styles without picking up the soul sphere.

For styles requiring 100% kills, barrel frags can significantly reduce your completion time, since there are so many barrels on the level. For example, if you go directly from the start point to the yellow key, many monsters will congregate near the barrels in front of secret #1, or near the barrels at the bottom of the staircase, as you proceed toward the yellow door. As you enter the room with the yellow door in it, run forward into the nukage, then turn left to shoot the barrel under the archway.

UV max runs benefit from going all the way into secret #7, because the long tan corridor can be cleared more quickly with the chaingun than with the shotgun. As the door opens, turn around and enter it backward, so you can shoot the nearby barrel to your left.

The large trap in the western area is very dangerous in UV -fast, due to the spectres' doubled speed. This has spurred increasing rocket usage over the years for crowd control [4], and even expert players usually retreat into secret #6 until there is enough maneuvering space to reach the switch.

UV -respawn runs can be sped up by firing through the window near the yellow key, and by clearing the room east of the yellow door more than once. This allows you to ignore most demons and spectres, who simply take more time to kill than zombies. Andreas "Anthe" Kren was the first person to use this approach in a Compet-N submission. [5]

In a UV Tyson recording, it is important to enter secret #2 to get the blue armor and the health pickups. Most players also grab the soul sphere, which speeds up the run by allowing the chainsaw to be used more often. (Secret #7 can be skipped in that case, although bullets should still be used on barrels and on groups of sergeants.) A small amount of time may be saved by not clearing the first hallway immediately, then killing stragglers with the chainsaw on your way to the computer room. Monster infighting in the first hallway, the computer room, and the blue key room can also save time.

A typical pacifist route begins by going straight to the yellow key, then to the yellow door. (This requires some luck, as with E1M3: Toxin Refinery, since a number of sergeants must be dodged at close range.)

The DOS shareware 1.2 release added a secret area consisting of the room with a blur artifact, two medikits, and a pentagram-shaped teleporter, to connect the central, western, and northern areas of the map. The 1.2 shareware release for NEXTSTEP did not yet include this change.[1]