E1M5: Power Plant (No Sleep for the Dead)

E1M5: Power Plant is the fifth map of No Sleep for the Dead. It was designed by Jan Van der Veken and uses a custom music track. 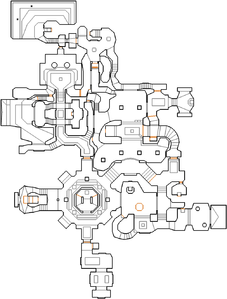 Map of Power Plant
Letters in italics refer to marked spots on the map. Sector, thing, and linedef numbers in boldface are secrets which count toward the end-of-level tally.

Take the shotgun on your left if needed then follow the passage, killing four zombiemen waiting around the first corner. Open the door ahead to enter an octagonal room and turn right to go around the computer column, climbing a set of steps in the north-east corner of the room. Follow the passage down another staircase then turn right into an area with a blue floor, heading forward until you reach a junction. Turn left to kill a shotgun guy then go round the corner to find more shotgun guys guarding a switch, which will lower a pillar holding the red keycard when pressed. Return to the junction and take the west fork this time to collect the red key, and some armor if needed.

Backtrack to the octagonal room and head through the north door with red key markings. Follow the passage left then right past zombiemen and imps, heading north until you reach a large room where the blue keycard can be found on a pillar. Go to the north end of the room and press the switch here, which will lower the pillar and allow you to get the blue key. Kill the cacodemon that teleports into the room entrance (or a baron of Hell on Hurt Me Plenty (HMP) skill level or higher) then backtrack to the blue-floored area you passed through earlier.

Back at the blue-floor area, head north to find a door with blue key markings and go through it. Go down the stairs and kill the zombiemen at the bottom then head forward to find a pillar holding the yellow keycard, which is guarded by imps and shotgun guys. Go past the pillar and flip the switch on the west wall to lower the pillar so you can reach the yellow key. Go through a doorway in the north-east wall and climb the steps to find zombies guarding a door with yellow key markings. Open the door and kill the imps waiting behind it, then step through and take the armor before following a passage down and up two sets of steps. Once you exit the passage, turn left and head towards a doorway through which you can see the exit door.

The exit door will not open, but as you approach it you will hear a wall lower behind you. Head east then turn left and left again to see a blue-floored alcove with a switch guarded by a demon, plus two imps on Ultra-Violence (UV) or Nightmare (NM) skill levels. Press the switch then head back to the exit door, watching out for two alcoves that contain a demon, shotgun guys, imps or cacodemons depending on skill level. Go through the exit door and head down the steps to get outside, turn right and kill any approaching monsters then turn right again to find the exit switch being guarded by a demon.

From the octagonal room, go down either of the west staircases and follow the path round to a lift which lowers as you approach. Kill the imps and collect a shotgun and 4 shotgun shells then press the switch here to open the computer column in the octagonal room, along with a closet holding two shotgun guys and an imp. Go inside the computer column to find a medikit and a partial invisibility powerup guarded by imps; approaching the powerup will open another alcove outside with more monsters.

A chainsaw can be found in a room north-east of the bridge with the yellow key.

A "Floor Lower to Lowest Floor" action (linedef 354) set to tag 6 does nothing when stepped over, as there are no sectors using that tag in the level.

* The vertex count without the effect of node building is 1489.