E1M5: Sewer System is the fifth and final map of Chex Quest 2. It was designed by Digital Café and uses the music track "". 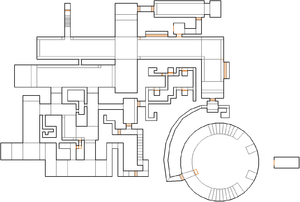 Open the door, turn left twice, open the two doors set in front of each other, turn right and open the door, take the yellow key and flip the switch. Backtrack to the fourway and go straight, go through the vent, turn left twice, open the yellow door, go straight or left to get the red key. Backtrack to the first fourway, turn right and open the red door, go right, open door, go downstairs, step on the blue pad teleporter, turn a 180 degrees and flip the switch.

You don't have to kill the flemoidus maximuses to beat the map.

* The vertex count without the effect of node building is 610.