E1M5: Site X (M_SITEX.WAD) is the fifth map in episode The Remains of UAC of ZPack. It was designed by Captain Toenail and uses the music track "At Doom's Gate (Remix)" by Sonic Clang from the Classic Doom for Doom 3 soundtrack, based on the original composed by Robert Prince. The par time defined in MAPINFO is 9:00. 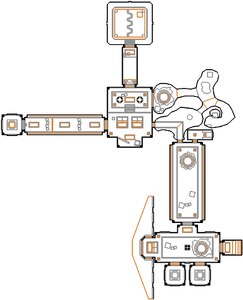 Map of Site X
Letters in italics refer to marked spots on the map. Sector numbers in boldface are secrets which count toward the end-of-level tally.

* The vertex count without the effect of node building is 1756.