E1M5: Temple of D'Sparil is the fifth map of episode 1 of Heretic Treasure Chest. It was designed by Ler and uses the music track "Atcoty" from Heretic, created by Kevin Schilder. 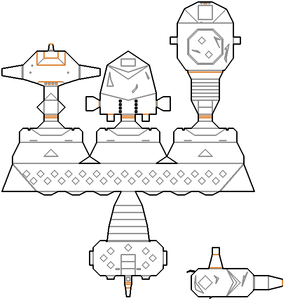 Map of Temple of D'Sparil
Letters in italics refer to marked spots on the map. Sector, thing, and linedef numbers in boldface are secrets which count toward the end-of-level tally.

Kill the fire gargoyles in front of you then collect the Bag of Holding and open the south door to find an Ethereal Crossbow and arrows. Head west down the hall to a gray door guarded by (depending on skill level) fire gargoyles, nitrogolems or ophidians then open the door to enter a room with a Dragon Claw guarded by sabreclaws and other enemies; bars will rise behind you to trap you inside the room. Collect the yellow key by the north wall, which will reveal a switch in front of you and undead warriors to the east and west. Kill the enemies then press the switch, which will lower the bars and allow you to escape.

Return to the main hall and head east, past some monsters that have been released, to a gold door between two yellow key gizmos. Open the door and head up the steps to a chamber with undead warrior ghosts, fire gargoyles and ophidians who are guarding a switch - cross the room, kill one or two weredragons that appear then press the switch and return to the main hall, heading south into a green room with a Silver Shield and a Tome of Power guarded by two nitrogolems. Go up the steps and open the exit door to find a switch; when you approach the switch you will be teleported into a small room with several monsters, including an iron lich. Kill the enemies then press the switch behind the lich to finish the level.

There is a teleporter in the exit room which can only be accessed in deathmatch, and teleports players back to the starting room.