E1M5: The Citadel is the fifth level in the City of the Damned episode of Heretic. 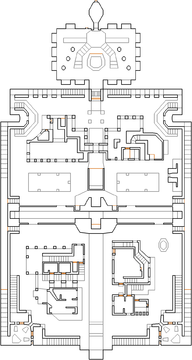 You begin the level by a river between four buildings. Head west and go up the stairs outside the northwestern building. At the top, dash across the gap to the upper level of the southwestern building and locate the Gauntlets of the Necromancer, a Silver Shield, and the yellow key. Use the yellow key to enter the northeastern building. Pull the switch to raise the stairs outside, then head to the top floor of this building to collect the Ethereal Crossbow. Now enter the southeast building and go upstairs to find the green key on the balcony. Head to the south of the area and go up either set of stairs to find a green door. Pass through and pull the switch to lower the red barrier. Head down the passage that is revealed and go through the second door to the side. A barrier lowers to reveal another outdoor area with a large building. Find the blue key in the water to the south of this area and take it to the blue door at the north end of the area. Pass through, turn left, and go behind the stairs to find a switch. Pull it to open the exit door. Now climb the stairs and head to the exit.

The following places do not give credit as a secret areas:

In the southeast, a house contains a room that holds a Shadowsphere. Sidedef 759 lacks a lower texture in front of the door. The error causes the wooden floor flat of the threshold to leak over its bottom wall.

Behind a corner, west of the blue door, sidedef 1,822 does not have an upper texture. The lack results in a similar leak.

* The vertex count without the effect of node building is 1718.