E1M5: The IMP Crowd is the fifth map of the first episode in Return to Hadron. It was designed by Matt Powell (cannonball) and uses the music track "Path of Destruction" by Mark Klem. 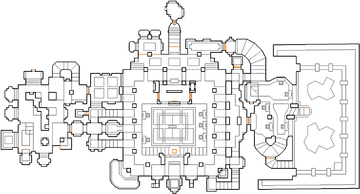 Map of The IMP Crowd
Letters in italics refer to marked spots on the map. Sector, thing, and linedef numbers in boldface are secrets which count toward the end-of-level tally.

First, knock off the enemies by firing the barrels. Then, go into the sequential corridor and clean up the rooms. Head to the right (east) of the corridor and go to the north (you can go to the west side of the corridor as well but there is a small gap that is sticky, as you need to use strafe jumping). At the end, you will see the stairs. Do not walk on them. Instead, turn left (or right depending on where there is a silver door) and enter the silver door leading into a room. In this room, press the switch and the blue keycard will be accessible. Drop down into the central area with water pool through any of the windows. Take the blue keycard on the first step of flight. Use the flight to ascend back to the corridor.

In the corridor, go to the eastern side of it and walk on the stairs that will lead to blue door (there is another blue door but this one is nearest). Enter this door and you will be in a room with two computers. Go to the stairs to your right to ascend. At the top, go to the other end of the room until you see a blue staircase to the left. Ascend and press the switch. Go to the balcony which is unlocked now. Get the yellow key into your possession. Depart back to the corridor via the stairs at the north and the second blue door.

Back in the corridor, run to the western side of it until you see the stairs leading down and descend on them or fall down to the central hall with water pool and go to the west room with the yellow door. Open the yellow door and will appear in the computer room. You may first explore all the room for items and cleaning up (which is recommend) or at first (or at last) drop into south west room with the key. Press the switch and numerous traps will open. Fight all the enemies and head to the north opened room and press the switch to lower the pedestal with the keycard. Go back to the room with the key and killing new monsters acquire the keycard.

Return to the central corridors and head towards north. You will see one of the white stairs. Ascend to a room and use other stairs leading down to the exit. Behind the exit door you can end this level.

* The vertex count without the effect of node building is 1946.