E1M5: Weapons Research Center is the fifth map of Massacre on Callisto, which is the first episode of The Lost Episodes of Doom. It was designed by Christen David Klie and previously released as a map in CHRIS_E1.WAD and later in CHRISK.WAD. According to the designer's notes in the book, it was released as CHRISK15.WAD in the first place. 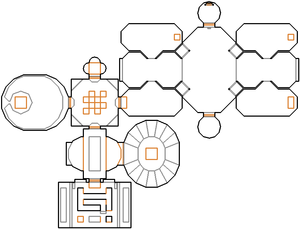 Map of Weapons Research Center
Letters in italics refer to marked spots on the map. Sector, thing, and linedef numbers in boldface are secrets which count toward the end-of-level tally.

From the start go through the door in front of you. There is an area with some teleporters and 3 other doors. Take the left and grab the yellow skull key and head over to the door on the opposite side. There jump down the blood pool, and take care for it hurts, so go to the concrete floor. From there you can see two yellow doors, one on the left side with an exit sign, and another on the right. Take the right first and grab the radiation suit. Then go to the concrete floor in the east and take the teleporter on the south-eastern bloodpool. This leads you to the blue keycard. Go back to the area with the two yellow doors, and take the left one, with the exit sign this time. Enter the room, lift the blue door an exit the level. 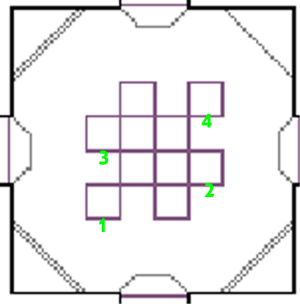 On the area with the teleporters, take first the one in the south-west, then the southern, then the western and finally the north-eastern, as shown on the detail mapshot, to grab all the stuff in that area.

In the area, where you grab the yellow skull key is an BFG9000 inside an teleporter. To get it, you have to go around the teleporter an got through it from the side, whith the nukage pool.

All five secrets are reachable from the starting room.

* The vertex count without the effect of node building is 504.