E1M6: Bird Cage is the sixth map in episode The Ruins of Parthala of Heretic Upstart Mapping Project. It was designed by Jon Dowland and uses the music track "". 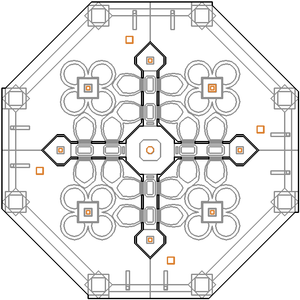 Map of Bird Cage
Letters in italics refer to marked spots on the map. Sector, thing, and linedef numbers in boldface are secrets which count toward the end-of-level tally.

You start the level inside a cross-shaped enclosure, surrounded by an open field. Step on the bronze pad in front of you to open the barrier leading to the middle of the enclosure, and release a number of gargoyles from a pen on your left. Go to the middle of the enclosure then head down the left (west) path to collect a Tome of Power on top of a second pad that will open the east path and release more gargoyles to the north, then head down the east path to find a Dragon Claw on top of the third pad. Step on the pad to open the north path and release a third group of gargoyles to the north, then head down the north path to find a Phoenix Rod on top of the final pad - stepping on it will lower the walls of the enclosure and allow some more gargoyles to teleport in behind you (or golems on bringest them oneth (BTO) skill level or higher).

The field holds four more pads that must be stepped on, starting with the pad in the south-east area and working clockwise. The first two pads will summon gargoyles on yellowbellies-r-us (YRU) or lower, or golems and an iron lich on BTO or higher, while the third pad will summon gargoyles on YRU or lower, golems on BTO or golems plus another iron lich on thou art a smite-meister (TAASM) or higher. The exit teleporter in the middle of the cross will lower once all the liches are destroyed - if you are playing on BTO or higher then you will not have to step on all the pads to bring in the liches, but on YRU or lower you will have to step on the north-east pad and wait for an unseen lich to be destroyed by a crusher.

* The vertex count without the effect of node building is 3642.

The level was generated from a WadC program.