E1M6: Fortress of Hate (Dawn of the Dead)

E1M6: Fortress of Hate is the sixth map of Dawn of the Dead. It was designed by Jan Van der Veken and uses the music track "Demons on the Prey," composed for Doom by Robert Prince. 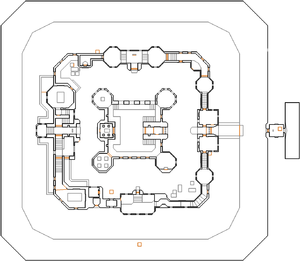 Map of Fortress of Hate
Letters in italics refer to marked spots on the map. Sector numbers in boldface are secrets which count toward the end-of-level tally.

The blue key is not present on Hey Not Too Rough or lower. The key is required to remove the bars blocking the entrance of the fortress, where the switch for the bars is behind blue key doors.

* The vertex count without the effect of node building is 1613.