E1M6: Frozen Wasteland is the sixth map in episode The Dark Tower of Masters of Chaos. It was designed by Caleb26 and uses the Hexen music track "Chart". 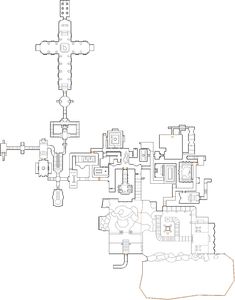 Map of Frozen Wasteland
Letters in italics refer to marked spots on the map. Sector, thing, and linedef numbers in boldface are secrets which count toward the end-of-level tally.

In this level, look out for dark blue patches of ice as they have low friction which will cause you to slide. Also, this level does not hold any Silver Shields or Enchanted Shields so keep an eye on your health.

Head straight forward up the stairs, slay the undead warrior ghost at the top and open the silver door to go outside. Go straight ahead over an ice patch, then turn left and go straight ahead to a metal fence; there are bars on your left and a passage on your right. Go into the passage, destroy the two wendigos which are revealed ahead of you, then turn right to go through an archway where you will find a hedge. Turn right first and follow the path to a Tome of Power, then turn around and go the other way around the perimeter of the hedge, killing any enemies you encounter. The path will eventually lead you to the center of the hedge, where a fountain holds an Ethereal Crossbow. Kill the weredragon here and press the switch, then retrace your steps around the hedges. Watch out for two alcoves that have opened, releasing a number of normal and ghostly undead warriors.

Return to the metal fence you found earlier and go past the bars on the left which have now opened, revealing another set of bars behind them. Turn left into another passage with gargoyles and press the switch at the end to open those bars and go through them. Kill the green chaos serpents here and go through the door in the orange brick building ahead. Kill the golem and nitrogolem ghosts then press the switch on the west wall.

Retrace your steps to the silver door at the start of the level, watching out for weredragons that have been released nearby. Look east when you reach the door to see an opening (pressing the earlier switch lowered the bars blocking it) and enter it. There is a T-junction ahead; turn right and destroy the nitrogolems ahead, then go round the corner to find another area with a hedge. Go straight ahead and follow the hedge round to see an arrow on the floor. Open the section of hedge that the arrow points at, then go forward and turn left. Follow the hedge on your left to its south-west corner and open that section to enter the middle area; kill the wendigos here and take the blue key they were guarding.

Backtrack to the silver door at the start of the level, and this time head west. Go round the corner then go into the opening on your right flanked by fire braziers. Go through the sloped archway and turn right (there is a Quartz Flask ahead on a patch of ice, with a pit behind it that can only be escaped with a Chaos Device) then follow the passage to a hedge. There is a snaking path through the hedge that contains golems and ammo pickups if you want them. In any case, go round the hedge to its west side and follow the path here round a corner and through another archway. Go straight forward past the hedge and open the door on your right flanked by blue key gizmos. Kill the undead warrior and ophidian ahead and turn right to see that the path divides in two. Take the left-hand path and follow it to a room with nitrogolems and sabreclaws.

Turn left and open the wall at the south end of the room that has a five-sided shape on it. Light a Torch to illuminate the chamber beyond if you have one, then go to the south end of the chamber and press the switch here. This will open the pillar in the center of the room and the surrounding walls, releasing a number of wendigos - be careful when fighting them as the slippery floor makes it harder to dodge. Once they are destroyed, take the Hellstaff that was hidden in the pillar and return to the previous room, going through the now-open west wall. Kill the weredragons in the passage ahead and follow it to a room with a white floor, which contains more wendigos. Look south and press the switch ahead, then head back down the passage - watch out for more weredragons that have been released from alcoves on either side. Take the Quartz Flasks from these alcoves, then backtrack to the point where the path divided. Slay the iron lich and undead warriors that have teleported into the area, then go down the right-hand path where a staircase has lowered.

Turn right into a narrow passage, watching out for a crushing ceiling ahead - a Tome of Power and Lesser Runes can be found in alcoves on either side if you are prepared to take the risk. Head forward and take the Frost Fang in the next room, and use it to kill any nearby enemies. Go left or right and follow the passages to an area with wall torches, then go south into a small passage and press the switch guarded by nitrogolems. This will open a wall nearby - go north into the passage and step on the lift behind it to be taken to a lower floor. Slay the chaos serpents in the icy room ahead and open the wall to the north, leading into a cross-shaped area with sandstone walls. There are disciples of D'Sparil and undead warriors ahead, so use the gray pillars on either side to give you cover from their attacks before moving forward. Climb the steps at the north end of the room, dispatch any remaining warriors and jump over the red altar holding a Quartz Flask, which will open the wall ahead. Slay the golems in the next room and head into the teleporter behind them.

You will be returned to the fork in the path near the blue key door - a wall ahead has opened, and behind it is a new enemy called Bormereth. This creature lobs fireballs and will create fire columns around itself when injured, so keep your distance and use powerful weapons to destroy it. Go down the steps that Bormereth was guarding and take the green key. (Move carefully on the platform with the green key, as it is slippery and falling into the pit below means instant death.)

Backtrack through the blue key door to the silver door at the start of the level. Go east from here through the wall opening and turn left at the T-junction. Go forward until you see two wall openings on either side and take the one on the right; kill the undead warrior ghost blocking the way and go through the door past the green key gizmos. You will enter a maze of trees; go east, then north to collect two crystal vials, north-west and then south-west to a switch. Press the switch then travel north-east, south-east, east to collect three more vials, then south and finally east through a set of bars which have lowered. Go through the passage behind and turn left to see nitrogolems on a platform ahead and ophidians behind them. Kill the enemies, then head north and jump over both sludge pits (a Chaos Device will be needed to escape if you fall in).

After crossing the pits, go into the opening on your left and move slowly down the passage; you will cross a walkover line that lowers the walls on either side to release wendigos, and chaos serpents from an alcove ahead. Once they are destroyed, continue following the passage and step into the teleporter at the end which will put you in a fenced-off area east of the start point. Dispatch the wendigos ahead, then head down the steps to an area with harmful sludge rivers. Turn left at the bottom of the steps and walk forward off the edge, then go forward onto an icy platform and climb the long curved staircase; this area is overlooked by wendigos and nitrogolems so stay on the move. When the staircase goes in two directions, turn left and climb the steps to a pillar with a Shadowsphere on it. Press the switch on the pillar's east face to lower it, along with a set of bars blocking the way forward; you will also reveal two chaos serpents on your left so be cautious.

Go back down the stairs and go east this time through the bars you just lowered. Go straight forward and lower the lift ahead, which will take you up to a walkway above. Follow the path north-west and climb the steps which go round a corner and end at an archway. Go through the archway and round two corners, kill the three chaos serpents which are revealed in front of you, then follow the passage past another archway and left round another corner. Go through the archway on your left, go down the steps and slay the nitrogolems and ophidians guarding a switch which you need to press. Go up the stairs to the north and through two archways to a previously-barred room. Kill any waiting weredragons, turn left and left again into a passage, then press the switch ahead of you. Turn round and kill the fire gargoyles that have been revealed behind you, then go back through the archway and turn left. Kill any chaos serpents blocking your way and follow the passage round a corner, then go through the archway you passed earlier.

Turn right, go down the steps guarded by undead warriors and through the open door at the bottom. Follow the passage down to the exit switch and press it to finish the level.

A Mystic Urn can be found in an area west of the blue key area, along with an Energy Orb and Flame Orb.

Opposite the doorway to the door requiring the green key, there is another doorway leading to an area with two hedges. Mace Spheres can be found between the hedges, and a Firemace can spawn in the fountain here.

One of the sludge pools south of the starting area (sector 123) is not flagged as a damaging floor so it can be stood in safely.

* The vertex count without the effect of node building is 2974.