E1M6: Gateway Lab is the sixth map of the first episode in Return to Hadron. It was designed by Matt Powell (cannonball) and uses the music track from Level 06 and Level 18 of TNT: Evilution. 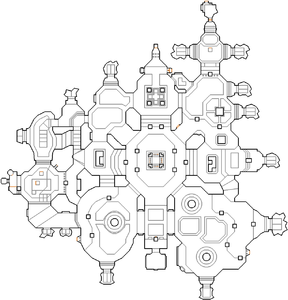 At the start, you see a range of barrels that must be exploded to make you way. Do not explode them manually, using your inventory weapons, but instead approach them and you will discover two sergeants on both sides. Provoke them to shoot at you, so they will unintentionally hit the barrels that will kill both sergeants. If you fire any weapon on this level you will wake enemies which will later spawn in this area. Do not shoot unless you want a big combat. The blue key is already accessible in the north side of the map, so run forward to the north of the map. Do not also forget to collect items and weapons scattered throughout on the level. Once you will meet the blue keycard, placed on the blue cross-shaped floor, take it. Still, do not fire any weapon. Take the chaingun and backpack in the same room and turn right. Open the blue barrier (requires blue key) and press the switch behind. It will open numerous areas on the level, as well as will prepare hell spawn and sergeants to teleport in here once you use any weapon. In addition, a baron of Hell trap will open behind you, so do not get on his sight for now.

The key can be seen in the same room where the blue key was. However, barriers block your way. You need to press two switches that will lower these barriers:

After all two switches pressed return to the room where the blue key was. To the north is the raised platform with the key that can be lowered by pressing the button on it. However, if the baron of Hell did not see you once and walks somewhere around he can hinder you now. Press the switch and possess the key.

With the yellow key, go to the room that is located east from the blue key room (with cross-shape structure). There, turn left and ascend the stairs. Go to the exit door in front. There is the end of the level.

* The vertex count without the effect of node building is 2189.