E1M6: Laboratory is the sixth map in the Dead Colliding episode of ConC.E.R.Ned. It was designed by Matt Powell (cannonball) and uses the music track "Infinite," originally composed by Tom Mustaine for TNT: Evilution. 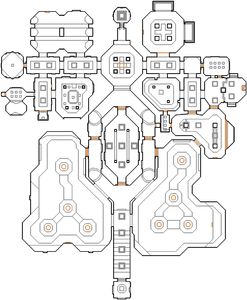 Map of Laboratory
Letters in italics refer to marked spots on the map. Sector, thing, and linedef numbers in boldface are secrets which count toward the end-of-level tally.

Kill the shotgun guys hiding behind the open door in front of you then go down the steps to reach a shotgun guarded by imps and demons. Follow the passage left or right until you get to a pair of doors, then open the north door and continue on to a chaingun guarded by a cacodemon. Head north into an octagonal chamber with some shotgun guys and an armor (taking it will cause spectres to teleport around you), then go west into a rectangular hallway and north into a room with damaging blue lights across the floor. Step over the lights to reach a button in the north-west corner (watching out for a demon hiding behind the pillar, or a baron of Hell on Ultra-Violence and Nightmare skill levels) then head due south through two more hallways to find the blue keycard sitting in an alcove. Watch out for shotgun guys, demons and barons teleporting into the area as you collect the key.

Return to the octagonal chamber and head east into another rectangular hallway, then north into a second chamber where some shotgun guys and demons will be released. Flip the switch by the west wall (which will allow you to collect the yellow keycard later) then return to the hallway and go east to a square gray junction before proceeding south to a door guarded by two cacodemons. Go through the door and press the button in the south-east corner, which will open a closet behind you containing lost souls, imps and two cacodemons and/or a baron, then head due north to another door and open it to find some shotgun guys protecting the yellow keycard. Taking the key will cause more shotgun guys and barons to teleport in to the room, as well as releasing lost souls from nearby alcoves.

Head south into the previous room and open the south-west door that was locked with the yellow key - you will enter a large room with four large pillars, which holds various monsters including a cyberdemon. Press the button in the south-east corner then leave the room by the west door to return to the central corridor, before heading round to the west side and opening the blue key door to enter a second large room with barons and cacodemons (plus another cyberdemon on Hurt Me Plenty or higher). Press the button by the south wall then return to the octagonal chamber at the north side of the level, dodging any demons and barons that have teleported in; the door to the north has opened, letting you reach the exit button.

There are two small rooms at the north-west and north-east corners of the level that require the blue and yellow keys to open respectively. The west room holds a plasma gun and energy cells, while the east room holds a rocket launcher along with four boxes of rockets and armor bonuses.

* The vertex count without the effect of node building is 2137.