E1M6: Last Aquaduct [sic] is the sixth map of episode 1 of Heretic Treasure Chest. It was designed by Ler and uses the music track "Onyx" from Heretic, created by Kevin Schilder. 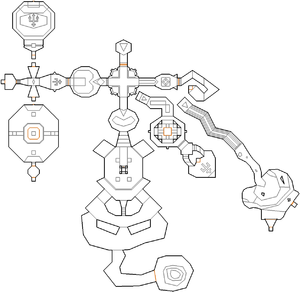 Map of Last Aquaduct
Letters in italics refer to marked spots on the map. Sector, thing, and linedef numbers in boldface are secrets which count toward the end-of-level tally.

Take the Hellstaff and Greater Runes in front of you then open the door to find a crossroads guarded by fire gargoyles, nitrogolems and undead warriors. Collect the Tome of Power (which does not appear on bringest them oneth skill level) then take the south path to find an Ethereal Crossbow before entering a room with a Bag of Holding (only on easy and medium skill levels). Go down the steps to a blue chamber containing several disciples of D'Sparil and other monsters, then press the switch behind the Silver Shield to open the south wall and reveal more monsters. Head due south until you enter a tunnel with a Tome of Power, then go round the corner to find a cavern with weredragons and fire gargoyles guarding the green key.

Backtrack to the crossroads, watching out for numerous monsters that have teleported into the large blue chamber on the way, then take the east path to a green door and open it. Follow the green passage past some nitrogolems to a teleporter, step into it and follow the next passage to a chamber with several monsters guarding a yellow key. When you try to take the key you will be teleported to a stream with a Silver Shield and other items; follow the stream to a green cavern with ophidians and sabreclaws, then climb up the steps to reach another yellow key in front of a teleporter. Take this key then step on the teleporter to return to the crossroads.

Take the west path from the crossroads to find some Lesser Runes and Mace Spheres in front of a yellow key door. Open the door and kill all the enemies waiting behind it, then head west to see an exit door behind two wooden blocks. There are two teleporters to the north and south that you need to use to lower these blocks.

After pressing both switches, go through the exit door to find a Mystic Urn and a teleporter that will send you to E1M7: Necrosis.

Refer to secret #2 below for information on reaching the secret exit to E1M9: Omgekeerd.

A Firemace can spawn in the large blue room south of the crossroads, next to a Shadowsphere.