E1M6: Reactor Complex is the sixth map of Knee-Deep in the Dead in Doom the Way id Did. It was designed by Nick Laurent (hobomaster22) in the style of John Romero. The par time defined in the DEHACKED lump is 3:30. 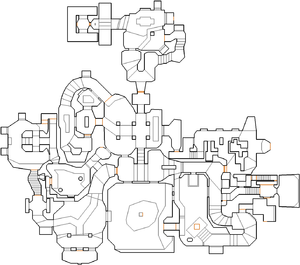 Map of Reactor Complex
Letters in italics refer to marked spots on the map. Sector numbers in boldface are secrets which count toward the end-of-level tally.

Grab the shotgun and open the door in front of you to find a walkway over nukage leading to two places. If you go left, you will discover you need a blue key for the door, so go right instead. Through the next door, you will find a path branching left. Again, ignore it, as you will be back much later for this area. Go straight east, and then south, following the path all the way till you reach the red keycard. Now head back to the red door that was around the bend you crossed, and enter the next area. This place is a small maze. What you need to do here is head right, into the nukage and onto a platform with a switch. Now get out of there to the north and head west as much as you can. There shall be a passage up so you can reach the blue keycard. Do not fall into the nukage when you grab it because there is no way out of there. Now backtrack to the beginning and take the path with the blue door. Behind the blue door, in the C-shaped room, get to the upper floor and head southward to another path with a nukage basin. Go along the path to the switch at the end, hitting it raises a bridge to the walkway just to your north. Head to this walkway by dropping from the ledge there, opening a door, and taking the aforementioned path branching left. Now go across this bridge and take the lift. In the next room, open the door on your left, and past it, turn right, and go all the way around, up a staircase until you find the yellow keycard. Do not fall in the nukage. Now backtrack to the bridge and go north to the yellow door. Take the right path down the stairs and get ready. When you enter the big room, a number of monster closets will open up. Kill all of the enemies and press the switch on one of the northwestern monster closets. This raises a bridge to the west allowing you to leave the map.