E1M6: Tesla/Ohm Labs (No Sleep for the Dead)

E1M6: Tesla/Ohm Labs is the sixth map of No Sleep for the Dead. It was designed by Jan Van der Veken and a remixed version of "They're Going to Get You" as its music track. 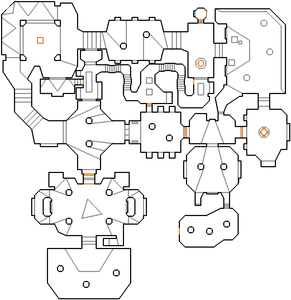 Map of Tesla/Ohm Labs
Letters in italics refer to marked spots on the map. Sector, thing, and linedef numbers in boldface are secrets which count toward the end-of-level tally.

Go through the doorway to encounter some zombiemen and turn left, then head through a door and go straight forward through the red inverted cross, collecting a shotgun on the way. Keep going forward and climb the stairs on your right, then follow the walkway around some nukage and head down another set of steps. Head forward between the pillars and imps and go down two more steps, then turn left and go through the exit door. The exit switch will be guarded by a demon on I'm Too Young to Die (ITYTD) and Hey Not Too Rough (HNTR) skill levels, or a cacodemon on Hurt Me Plenty (HMP) or higher.

Go to the north-west corner of the walkway surrounding the nukage to find a switch, then press it to lower a pillar in the middle of the nukage holding a red keycard. Go to the room past the red inverted cross and use the red key to open the south door - the room behind it holds a rocket launcher, two boxes of rockets and a backpack which are protected by imps, shotgun guys, plus two cacodemons on HMP or higher. The door will lock behind you for 30 seconds when you enter the room.