E1M6: The Black Heart is the sixth map in episode The Coast of Praevus of HUMP mini. It was designed by ETTiNGRiNDER and uses the music track "Mist" by Kevin Schilder. 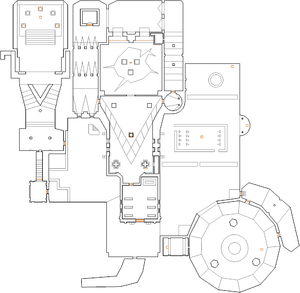 Map of The Black Heart
Letters in italics refer to marked spots on the map. Sector, thing, and linedef numbers in boldface are secrets which count toward the end-of-level tally.

Take the Ethereal Crossbow in front of the locked door ahead of you then head north-west into an open area with gargoyles as well as a podium with a Dragon Claw on it. Go through the wooden door west of the podium and kill some more gargoyles, then head north past an ophidian to go down some steps to a water pool. Kill some more gargoyles along with golems then head north up some moss-covered steps to find the yellow key between two Energy Orbs. Watch out for one or three disciples of D'Sparil that are released from the waterfalls around you.

Return to the starting point and head north-east to the other side of the center building, then go south-east to enter a curved stone tower that has a large spiral staircase inside it. Head up the steps, passing golems and sabreclaws on the way (and some nitrogolems near the top), and get ready to face a crowd of sabreclaws and golems (plus two disciples and an iron lich on bringest them oneth (BTO) skill level or higher) when you reach the top. Enter the teleporter on the east side of the tower to land on top of a wall, then enter the enclosed graveyard below and to your right to find the green key. Destroy the nitrogolem ghosts that appear by the graves, then leave the graveyard and head east to find a Hellstaff in front of a teleporter leading back to the tower.

Return to the starting point and open the two locked doors to the north to enter a chapel with some undead warriors. Head forward between the pews and open the door in the north-west corner to enter a large hall with golems and gargoyles at ground level, along with nitrogolems on the V-shaped staircase ahead and undead warriors on an overhead ledge. Go up the left-hand side of the staircase to a wooden door and open it to find a long columned hallway, destroy the approaching sabreclaws and ophidians then head north between the columns, watching out for ambushes from golems. There is a wooden door at the end of the hallway - open it to find four disciples guarding the blue key.

Backtrack to the V-shaped staircase and go up the right-hand steps this time to find another door, which has a blue key door behind it guarded by three more golems. Open this door and go up a green staircase guarded by gargoyles, nitrogolems and sabreclaws then turn left at the top to enter a stone hall with more gargoyles as well as four ophidians. Drop down either of the holes by the south wall and use the black lift in front of you to enter a rectangular room that has three metal columns in its center; pressing the switch between these columns will lower them and release gargoyles or disciples, but it will also lower part of the south wall and reveal an iron lich. Step through this wall and head forward to an exit door, kill a disciple waiting behind it on BTO or higher then press the blue switch to finish the level.

A Phoenix Rod can be found behind the chamber holding the blue key.

The player 1-4 starts (Things 0 through 3) have no flags set for any of the three difficulty classes, but because of special handling in the engine, they function normally in the level.

* The vertex count without the effect of node building is 1388.