E1M6: The Cathedral is the sixth level in the City of the Damned episode of Heretic. This level contains a secret exit leading to E1M9: The Graveyard. 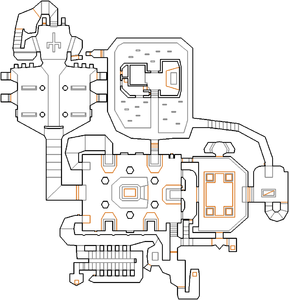 Map of The Cathedral
Letters in italics refer to marked spots on the map. Sector, thing, and linedef numbers in boldface are secrets which count toward the end-of-level tally.

You start out facing a set of pews, with the yellow key immediately behind you but above your reach. Turn right and follow the curving stairs to the window above the starting point. This will lower the yellow key and open an ambush. Grab the key and head down the aisle, passing around the grey stone wall when you reach it. Head up the stairs and pass through the yellow door to enter the central area of the level. Turn right and press the switch, then turn around and run over to the platform that lowers. Ride it up and follow the passage to collect the Ethereal Crossbow. Now go to the easternmost grey structure in the central room. Pull the switch to lower it, then ride up and pass through the door into a room with many stained glass windows. An ambush triggers as you enter this room. Collect the Dragon Claw and head through the door opposite the one you came in from. You will find yourself in a room containing barrels and an altar. This appears to be a dead end, but if you search the southeastern wall, you will see a section that is out of alignment. Open this hidden door and head up the stairs to run over the altar. A section of the floor will lower temporarily. Go through the passage that is revealed and follow it to a graveyard with a large tomb in the center. Enter the tomb and locate a corner with a flashing light. Open the west wall of this corner and make a U-turn to the right as you pass through to find a switch. Pull the switch to raise the stairs near the green door, then go through the teleport to find yourself on top of the coffin. As you walk away from the coffin, a section of the roof will fall in, revealing monsters and the green key. Take the key and exit the building the way you came in, going straight ahead through the demon face door to find yourself in the central room again. Head straight across and up the stairs to the green door and pass through. Make a wide U-turn to the right to find a corridor with grey stone walls and wooden supports. Head down the corridor to find a switch next to a platform overlooking the central room. Pull the switch and cross to the northeast corner of the room, where you will find that the previously blocked switch has been made accessible. Pull it to open the central structure in the room, revealing the exit.

Due to an anomaly in the level's REJECT table, if the player is standing in sector 95 (the sector touching the western edge of the yellow door), monsters in the large room on the other side of the door will be unable to see them. This is most noticeable immediately after opening the yellow door, as several monsters in plain view of and facing the player will not wake up until the player either moves through the door frame, or steps backward into sector 94, or makes a sound. Additionally, the two Undead Warriors on the central platform cannot use ranged attacks against the player.

* The vertex count without the effect of node building is 1124.