E1M6: Who's Afraid of Red, Yellow and Blue? (Infinity)

E1M6: Who's Afraid of Red, Yellow and Blue? is the sixth level of Infinity. It was designed by Bjorn Hermans and Holger Nathrath, and includes a custom music track, which is a cover of "Jump" by Van Halen. 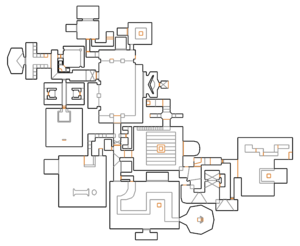 Map of Who's Afraid of Red, Yellow and Blue?
Letters in italics refer to marked spots on the map. Sector numbers in boldface are secrets which count toward the end-of-level tally.

Because Secret #22 is not accessible without the no-clipping cheat, the maximum number of secrets obtainable is 95%.