E1M6 is the sixth map of BOBKDV2. It was designed by Bob Carter. It was later adapted into E3M3 of The Lost Episodes of Doom. 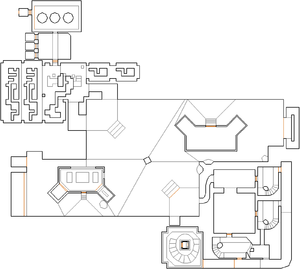 Map of E1M6
Letters in italics refer to marked spots on the map. Sector, thing, and linedef numbers in boldface are secrets which count toward the end-of-level tally.

A zombieman (thing 97) is stuck inside the crates at the start of the level, so cannot be killed, thus the maximum achievable kills percentage is 98% on easy skill and 99% on medium and hard skills.

As this level does not contain official secrets, the NM 100S category is redundant. Due to the zombieman bug outlined above, 99% kills is acceptable for UV max and its derivative categories.

* The vertex count without the effect of node building is 831.