E1M7: Chapel of the Fallen Moon (Masters of Chaos)

E1M7: Chapel of the Fallen Moon is the seventh map in episode The Dark Tower of Masters of Chaos. It was designed by Doom_Warrior and uses the Hexen music track "Chapel 3".

This level includes a secret exit to E1M10: Borderlands. 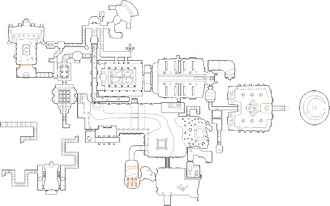 Map of Chapel of the Fallen Moon
Letters in italics refer to marked spots on the map. Sector, thing, and linedef numbers in boldface are secrets which count toward the end-of-level tally.

You start the level with several enemies facing away from you - golems on easy skill levels, or nitrogolems and fire gargoyles on medium or hard. Dispose of them then head toward the silver door at the north end of the room, which opens automatically as you approach. A Hellstaff can be found behind it on easy skill levels, or an Ethereal Crossbow on medium or hard. In the next room, dispatch the gargoyles and sabreclaws and take the shield behind the barrels - enchanted on easy or medium, or silver on hard.

Head up the curved staircase and step into the room, watching out for enemies that are revealed on your right. Take the Energy Orb and Greater Runes, then climb the east steps and open the door at the end. The green corridor behind it has doors locked with the green and yellow keys - destroy the sabreclaws approaching from either side, then head south and open the stone door in the south wall to get outside.

Turn right and follow the wall round to a staircase protected by another sabreclaw. Follow the steps up to a stone walkway and follow it to a wooden door, dealing with any enemies that block your way. After going through the door, collect the Energy Orb behind the red pillar and go east into a corridor. After passing between the second set of wall torches, alcoves will open on either side to release sabreclaws - destroy them, collect the ammo at the end of the passage and head north through another door to another walkway. Follow it east and south and make a running jump over the gap at the end, where a nitrogolem guards a switch.

Pressing the switch opens a set of bars on your left blocking a tunnel. Drop off the ledge you are standing on and head east to a fountain containing a Tome of Power, then turn right and head through the tunnel you just opened, dispatching golems and green chaos serpents. Once through the tunnel, turn left and head for the stone building in front of you, opening the door on its south side. Kill any waiting gargoyles, then head north through another door. Turn right and head past the golems to see an Energy Orb and the yellow key.

After taking the yellow key, retrace your steps to go back outside where four nitrogolems and four sabreclaws have teleported in. Go back through the tunnel and follow the tan path past the fountain, then west across a bridge. When the path ends, go through the north door to return to the green corridor. Head forward and go through either of the doors with yellow key gizmos. You will enter a large, columned hall; the green key is sitting on a metal pillar in the center of the green floor. Dispatch the enemies in the hall then go to the west wall, where a Phoenix Rod is sitting in front of a switch. Press the switch to lower the pillar with the green key and collect it.

Go back through either of the yellow key doors and turn right to see a number of nitrogolems and ophidians teleporting in; dispatch them then head north to the door behind the green key gizmos. Climb the steps and turn left, turn left again to go down some steps and then turn right to go through a passage to a square room. Turn left and head down another set of steps where two or three sabreclaws are waiting. Head forward and open the wooden door at the end of the passage, leading to a corridor with wooden supports, head through it and turn right to see a large hall with a red central structure. Go forward past the red structure and climb either staircase to the raised north end of the hall. Collect the Dragon Claw sitting on this raised area, then look north and press the switch in front of you. Doing so opens a door elsewhere in the level; it also lowers the red structure to reveal a crescent moon, and lowers the nearby windows to reveal four chaos serpents and two disciples of D'Sparil.

Backtrack to the green key door - on the way, you will come across an open alcove with disciples guarding an Enchanted Shield. Back at the green key door, go through it then head south down the green corridor and open the door at the end to go back outside. Follow the tan path across the bridge, but this time head east towards the trees. When you reach the trees, look north to see that a silver door has lowered to reveal a staircase. Head through the door and follow the staircase down until you reach a stone passage. Turn right, slay the golems ahead and go through the archway.

You will enter a room that has golems and undead warrior ghosts to the north, joined by nitrogolems on medium and hard skill levels. Kill them all, then go to the north wall and take the blue key sitting on a step. This will open a number of alcoves in the room, releasing disciples to the east and west and weredragons and chaos serpents to the south.

Once all the enemies are destroyed, leave the room through the south-east archway, turn left and clear the golems ahead. Go all the way up the staircase ahead, which will lead you to a room with a diamond-patterned floor and crushing ceilings. Navigate your way past the crushers to a teleporter at the end of the passage, which will send you to the columned hall past the yellow key doors.

Head straight forward and open the door at the east end of the hall, between two blue key gizmos. Dispose of the waiting gargoyles and head east through either wooden door, leading to a large hall with benches facing a throne. There are several enemies including nitrogolems, gargoyles and an iron lich - once they are destroyed, head east to the throne and turn left to go through a wooden door. Turn right, head round the corner past sabreclaws and gargoyles and press the switch at the end.

Return to the throne room to find that undead warriors and disciples have been released into the area. Go through the now-open exit door south of the throne and follow the passage round to a large stone hall. Climb either of the sandstone staircases and step on the red crescent moon on the floor ahead guarded by one or two undead warriors. Stepping on the moon opens the wall ahead; step through and walk into the sky texture ahead to be teleported to a dark room. (You cannot go back to the main level after this point, so turn back if you want to find the secret exit or explore further.)

Light a Torch if you need, slay the ophidians lurking in the dark and press the switch by the northern stained-glass window. This will brighten the room and lower the exit teleporter in the center of the room, which will take you to E1M8: Tower of Darkness.

Refer to secrets #7 and #8 below for information on finding the secret exit to E1M10: Borderlands. The exit itself is placed behind four sets of bars that are connected to switches hidden throughout the level.

After pressing the switch that opens the tunnel to the yellow key building, drop off the ledge and head west into a dark tunnel. Follow the tunnel to a sloped area with graves; approaching the graves will cause golem and nitrogolem ghosts to rise from the floor. Go east from the graves into a room with mossy walls, which contains a Shadowsphere and other pickups.

After passing through the tunnel to the yellow key building, turn right to see a number of barrels. There is a Map Scroll hidden among them, by the mossy wall.

After climbing the steps past the green key door, turn right and head through a wooden frame then go straight ahead into a wide room. As you enter the wall ahead will lower to reveal enemies guarding several pickups. This room also has two nooks with barrels, which contain a Quartz Flask and a Quiver of Ethereal Arrows.

Secret #1 cannot be reached by normal means, while secret #3 is too narrow for the player to be recognised as entering it. This makes it impossible to get 100% secrets in this level without cheating.

* The vertex count without the effect of node building is 5721.