E1M7: Core of Evil (The Lost Episodes of Doom)

E1M7: Core of Evil is the seventh map of Massacre on Callisto, the first episode of The Lost Episodes of Doom. It was designed by Christen David Klie and previously released as a map in CHRIS_E1.WAD and later in CHRISK.WAD. 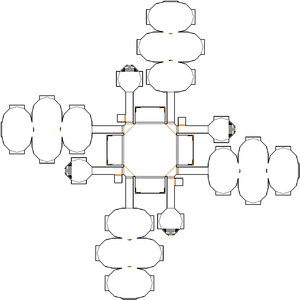 Map of Core of Evil
Letters in italics refer to marked spots on the map. Sector numbers in boldface are secrets which count toward the end-of-level tally.

At the start run and kill the spiderdemon, the soul spheres you need are in the corners of the smaller rooms with the hell nasties, near them are switches to get out of the start room.