E1M7: Courtyard of Elements is the seventh map in episode The Ruins of Parthala of Heretic Upstart Mapping Project. It was designed by Simon Howard (Fraggle) and uses the music track "Acacia" by Kevin Schilder. 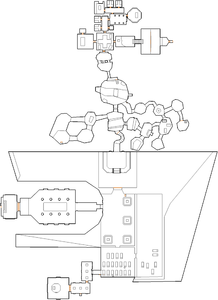 Map of Courtyard of Elements
Letters in italics refer to marked spots on the map. Sector, thing, and linedef numbers in boldface are secrets which count toward the end-of-level tally.

Head straight forward as the level starts until you see a doorway on your left between two braziers and go through it to a columned hall. Ignore the two sabreclaws approaching from either side and head straight forward to a large door with a Crystal Geode in front of it; open the door and push past two more sabreclaws to an Ethereal Crossbow in front of a switch. Press the switch then go back outside and look for another switch next to the fountain in front of you - pressing both switches will open the large gate to your left as well as a second gate further ahead. Go through the large gate to a fortification guarded by two undead warriors and a weredragon, then enter the fortification and head straight forward to a dark tunnel.

Head down the steps to a cave with three exits, though the east exit is blocked by a gate for now. Go through the west doorway to a smaller cavern and you will see another weredragon ahead; ignore it for now and turn left to enter the next cavern then look right to see a weredragon protecting another switch that will open the gate you saw earlier. Go back to the starting cave and head through the now-open east doorway, then continue east through two more caverns and a weredragon to a room with some boxes. Go around the largest box and head north to a chamber with a lava fountain, then proceed west until you reach a switch above a large cave with a lava river; press the switch to raise a bridge over the river then cross it and head up some steps to a tunnel containing an ophidian. Head north through the red stone wall and open a door in front of you to reach a storage room with another ophidian.

There are three doors leading out of the storage area, two of which require keys. Open the west door and push past two ophidians to get to a table holding the green key, then return to the storage room and pass through the north door to reach a hallway with four more doors and an ophidian. Open the north-east door to enter a columned room with another ophidian and a weredragon, then pass through the door on your left (north) to enter another hallway; there are two more doors on the north wall, and the blue key is behind the left-hand door. Retrace your steps to the storage area and open the east door, then head up the stairs in front of you to a stone door that will open automatically as you approach to reveal two iron liches. Push past the liches to the exit door and open it to find a blue switch that will end the level.

After reaching the fortification, instead of going inside it check the outside walls for a Torch, a Silver Shield and a Quartz Flask.

The living area behind the green key door holds numerous pickups, including a Tome of Power and Hellstaff in the eastern room and a Bag of Holding in the north-west room.