E1M7: Logic Core is the seventh map of Knee-Deep in the Dead in Doom the Way id Did. It was designed by Trevor Primmett (iori) in the style of John Romero. The par time defined in the DEHACKED lump is 4:00. 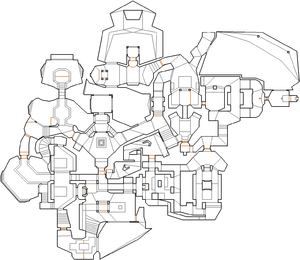 Map of Logic Core
Letters in italics refer to marked spots on the map. Sector, thing, and linedef numbers in boldface are secrets which count toward the end-of-level tally.

Two zombiemen will see you from the start. The lift that is along the path you should go has a medikit and shotgun shells if you need them. In the big room with the shotgun, find the hall with the switch. Pressing it opens another hall. Head through this hall, and at the fork go right into a longer hall. This one takes you to a large room. Take the lift at the south end of this room. On the other end of this lift is a very complex area. There are a ton of enemies living in and around this place. You can go straight across to the lift and ride it up to get an armor. However, you should probably get rid of the enemies here first. When done, go through the lit passageway that is close to the lift. You will find a switch and this opens up a number of walls leading to a very maze like area. Again, a lot of monsters reside in this maze, so kill them. You might find the blue door in the northeast, as well as a lift to the northwest, which should be your next destination. Take this lift up, then go left and follow the path to a switch which you should press. Now go back through this passage and you will find a wall that opened up. This wall leads to the other side of the fork mentioned earlier. You can go here if you want but since you do not have the blue key yet, this area will not be of much use for now.

Head back through the other path again, down the long hallway. You might find some monsters pouring out from the big room, that is because the door on the west side of the room is open. Head through this door and take the path going north until you grab the red key. A wall opens revealing imps upon your retrieval of the keycard. Go back and continue along the path to the red door there and open it. Take the lift down, then head along the walkway. In the next room, turn right, and right again up the stairs to a switch. This lowers the north wall in the room. Behind the wall, go up the curvy staircase to retrieve the blue keycard. Now go back to the room with the wall that you lowered and head south to the other red door. This leads to the other end of the complex area. Go back through here, and through the lit passageway back to the maze, heading northeast till you find the blue door. Alternatively, return to the aforementioned fork, and now you can take the other path which has a blue door too. Behind either blue door, head east, then north. The exit door should be to the east. Head in here, press the switch to lower the lift and exit.

* The vertex count without the effect of node building is 1560.