E1M7: Necrosis is the seventh map of episode 1 of Heretic Treasure Chest. It was designed by Chris Oliveri (CodenniumRed) and uses the music track "Winnowing Hall" from Hexen II. 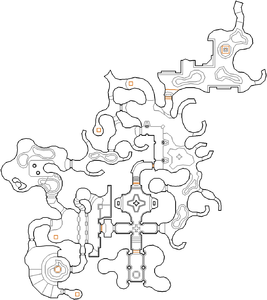 Map of Necrosis
Letters in italics refer to marked spots on the map. Sector, thing, and linedef numbers in boldface are secrets which count toward the end-of-level tally.

Take the Ethereal Crossbow and arrows in front of you then open the door to confront an undead warrior ghost. Go up the steps to a crossroads guarded by two ophidians, take the east path to a water-filled tunnel then head north past some sabreclaws until you reach a larger cavern with a Dragon Claw that is overlooked by ophidians and gargoyles. Head north over a waterfall then turn left to see an iron lich surrounded by pods, destroy it then collect the Bag of Holding it was guarding before heading into a tunnel with fire gargoyles. Head west down a narrow passage to find a blue teleporter which will put you on a higher floor that you can follow to the blue key.

From the blue key, walk south-east to drop down to a ledge with a Shadowsphere then follow the ledge to a door leading into another cavern with a Hellstaff (a barrier will rise as you enter the cavern, blocking the door you just used). Inside the cavern are a few nitrogolems and two to five iron liches who are guarding several items including an Enchanted Shield, a Mystic Urn and a Tome of Power, as well as a Quartz Flask and a Ring of Invincibility that can be reached using a whirlwind. After killing the enemies, press the switch on the pillar under the Quartz Flask - approaching the switch lowers the barrier allowing you to leave the cavern, where you will find that the water level has risen allowing you to return to the crossroads near the starting point.

Back at the crossroads, take the north path and go round a cross-shaped pool to a blue key door. Open the door and push past two undead warrior ghosts, then go through the next door to a brown ledge which you can follow to another tunnel with sabreclaws. Head west to a wooden arch with a Quartz Flask, then continue west until you pass through a second arch and reach a cavern with many fire gargoyles. Walk round a brown platform with a Quartz Flask and two piles of Mace Spheres then head south past some ophidians; the current will carry you to an outdoor area with lots of fire gargoyles guarding the yellow key. Taking the key will lower a barrier nearby and reveal a tunnel with one or two iron liches - enter the tunnel and follow it to a staircase guarded by nitrogolem ghosts, then head up the steps and enter the blue teleporter at the top to return to the crossroads.

Head west to a yellow key door and destroy an iron lich waiting behind it, then head north up some steps to a cavern with two Energy Orbs. Walk up another flight of steps to a platform with undead warrior ghosts and ophidians then continue south until you reach a circular chamber with more ophidians. Step on the blue plinth in this chamber to finish the level.

Head east from the crossroads into a waterway then walk due north until you reach a wall with several stalagmites and stalactites. Head west from here to enter a small chamber with a Tome of Power, a Quartz Flask and a Quiver of Ethereal Arrows.

A Firemace can spawn on the brown platform in the western-most area, between the Mace Spheres.

* The vertex count without the effect of node building is 2163.