E1M7: The Inner Sanctum is the seventh map in episode The Coast of Praevus of HUMP mini. It was designed by Xindage. 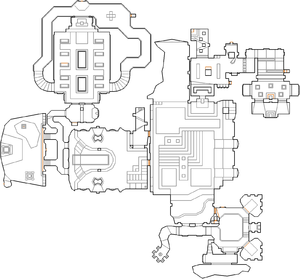 Map of The Inner Sanctum
Letters in italics refer to marked spots on the map. Sector, thing, and linedef numbers in boldface are secrets which count toward the end-of-level tally.

Follow the trail of Wand Crystals to a few gargoyles then head straight forward to collect an Ethereal Crossbow on the bank of a water pool. Head round the outside of the pool, watching out for attacks from undead warriors and nitrogolems on the way, until you reach a yellow key door with a switch next to it. Press the switch then head round to the south side of the pool and enter the doorway here, then turn right to destroy one or two nitrogolem ghosts along with an undead warrior behind them. Past these enemies are some steps with a fire gargoyle on them that lead to the yellow key.

Go back to the yellow key door and pass through it - on your right is a water pool that contains ophidians on bringest them oneth (BTO) skill level or higher. Head through the water and go up the wooden steps to confront an iron lich and one or more undead warriors, then go through the black doorway in the north wall and destroy a couple of golem ghosts that ambush you before entering the next room. Take the Gauntlets of the Necromancer in the middle of the room if you wish (which will trigger an ambush by golems and sabreclaws) then head east towards a set of red bars with two disciples of D'Sparil in front of them; from here you can head north to find a switch guarded by an ophidian that will lower the bars. Go past the bars and follow the stairs down to a room containing a Hellstaff as well as Greater and Lesser Runes, then take the weapon to trigger an ambush by weredragons. Go through either of the openings in the south wall to find the green key being guarded by an iron lich.

Go back outside then head south-west towards two doors that have green gizmos next to them. Open the south door and go down the steps to a hall with golems, undead warriors, gargoyles and disciples, then cross the hall and head through either of the west doorways to find steps leading down to an icy area that initially contains a sabreclaw and a couple of gargoyles - the bottom steps will lower as you step on the ice, preventing you from climbing back up. Pressing the switch on the west wall will lower a green block behind you revealing a maulotaur as well as causing a gang of sabreclaws to teleport in, but it will also lower the waterfall inside the pool and reveal a second switch that needs to be pressed to open some doors further into the level. After pressing this second switch, look in the south-west corner of the ice to find a Shadowsphere next to a third switch that will raise the steps leading out of the area so you can escape.

Leave the ice and follow the tunnel north until you reach a pair of weredragons guarding a Dragon Claw, then go through either of the doorways here to enter a large church with several disciples. Go up either of the staircases in the south-east and southwest corners then follow the passages past some undead warrior ghosts until you get to the north side and find a switch inside a recess (it will be protected by an iron lich on thou art a smite-meister or higher); after pressing the switch, go back down to the church and approach the altar on the north side where a pillar holding the blue key has lowered. With the blue key, backtrack to the room that held the Gauntlets of the Necromancer then look in the south-east corner for a blue gizmo - there is a mosaic door next to it that can be opened to reveal another switch, which will open a door to the north. Destroy the sabreclaws that come through the door (along with nitrogolems on BTO or higher) then step through the door to reach the exit teleporter.

A Bag of Holding can be found between the pillars at the bottom of the wooden stairs in the center of the level, and a Firemace can also spawn nearby.

* The vertex count without the effect of node building is 1994.