E1M7: Titan's Anomaly is the seventh map of Fava Beans. It was designed by Sean Birkel. 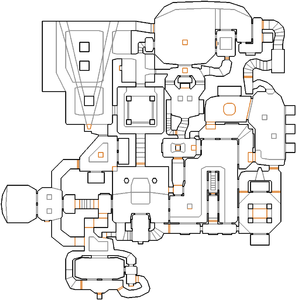 Map of Titan's Anomaly
Letters in italics refer to marked spots on the map. Sector numbers in boldface are secrets which count toward the end-of-level tally.

You start in a room with a window ahead which overlooks a room with a nukage pool in the center. To get there, use the stairs on either left or right to descend down. Do not enter the door yet but use a small lift. Take the door. A two sided panel with two switches will appear. Press the switch from the northern side of the panel (the second switch is optional to press). Head back to the room with nukage pool you were earlier. This time, enter the door to the north. Go around the fence to the north. The wall was previously closed. Enter a nukage area. It contains places and items that are optional. So, go ahead to a staircase at the entrance which is accompanied by wall lamp. Take the blue keycard.

With the blue key now, head back to the room where you pressed the switch that unlocked the nukage area. Descend down to a room to the north. Flip the lever to open both locked doors. Take either one. Collect the yellow key if you want. Head right. You will meet an exit door requiring blue key. Enter it and press the switch in the exit room to end.

* The vertex count without the effect of node building is 1334.