E1M7 is the seventh map of Nuke Mine. It was designed by Jason Hargreaves and uses the music track " ". 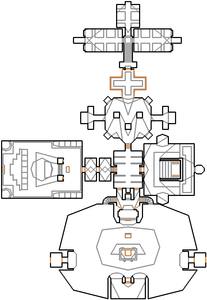 The red key is not present on Hey, Not Too Rough or lower, which makes the level impossible to beat on those skill levels without cheating.

Past the red door, it is possible to run straight to the next room and hit the satyr switch straight ahead while the barrier behind you rises up. The satyr switch lowers two alcoves with barons of Hell (not on Hey, Not Too Rough or lower) and also the barrier itself, but if you are too fast when pressing the satyr switch, you will not be able to return to the intersection.