E1M8: Citta Dei Morti Viventi is the eighth and final map of episode 1 of Heretic Treasure Chest. It was designed by Thomas van der Velden and uses the music track "John" from Heretic, created by Kevin Schilder. 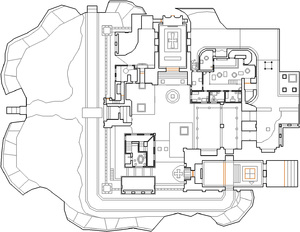 Map of Citta Dei Morti Viventi
Letters in italics refer to marked spots on the map. Sector, thing, and linedef numbers in boldface are secrets which count toward the end-of-level tally.

Head across the bridge in front of you and follow the passage beyond it to a courtyard, then head east to an Ethereal Crossbow and continue in that direction until you cross a sludge pool and walk through a short tunnel with an open gate. Turn left and head towards a tower with one or two fire gargoyles, then enter a doorway on your left which leads to a large room with undead warriors. Step over the bar to reach two crystal vials and Quartz Flasks then head west into a storeroom before proceeding north-east to get outside again. Head west and south to a stack of crates which you can climb to reach the upper floor of the building, then walk to the window in front of you to find the yellow key.

Drop through the window to the ground below then head north to a wide door requiring the yellow key. In the next room is a Dragon Claw guarded by disciples of D'Sparil - head north up the steps to a blue switch and press it, which will open alcoves containing undead warrior ghosts to your left and right, then head through the left-hand alcove to get back outside. Head due south past two disciples to a dark passage and step on the lift that lowers ahead of you to reach a higher ledge, then head north-west into a room with two or three disciples who are guarding a window containing the green key.

Once all four liches are destroyed, return to where you first encountered them to find that the exit doors in the room have opened. Step through and walk past three fire gargoyles into a dark passage, which leads into a tunnel full of teleport glitter - the level will automatically end when you reach the end of this tunnel.

After reaching the tavern area, climb the wooden stairs in this room to find three bedrooms containing an Ethereal Crossbow, a Tome of Power and ammo.

After reaching the area with the iron liches, three ammo caches will be revealed.

* The vertex count without the effect of node building is 2092.