E1M8: Demon Pit is the eighth and final map in the Come out fighting episode of NJ Doom. It was designed by Nigel Rowand (Enjay). 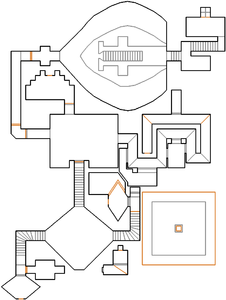 Map of Demon Pit
Letters in italics refer to marked spots on the map. Sector numbers in boldface are secrets which count toward the end-of-level tally.

Four other sectors are marked as secret (sectors 17, 40, 82, and 85) but have no sidedefs, thus are inaccessible, making 33% the maximum obtainable secret percentage.

* The vertex count without the effect of node building is 487.