E1M8: Launch Bay is the eighth and final map of Double Impact. It was designed by Matt Cibulas (RottKing) and Ralph Vickers (Ralphis), and uses the music track "". The par time defined in the DMAPINFO lump of the edition released as official add-on is 5:15. 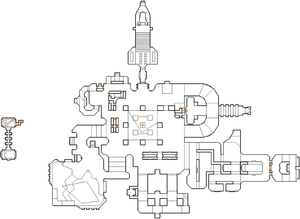 Map of Launch Bay
Letters in italics refer to marked spots on the map. Sector, thing, and linedef numbers in boldface are secrets which count toward the end-of-level tally.

Unfortunately, there is a small chance that pressing all four switches does nothing at all, resulting in a softlock. The version offered as an official add-on is not affected by this potential bug, since it does not rely on crushing barons of Hell to execute the tag 666.

* The vertex count without the effect of node building is 1613.