E1M8: Particle Accelerator is the eighth and final map in the Dead Colliding episode of ConC.E.R.Ned. It was designed by Matt Powell (cannonball). 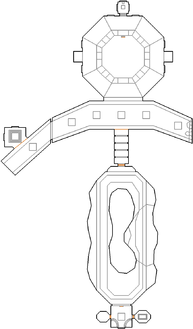 Map of Particle Accelerator
Letters in italics refer to marked spots on the map. Sector, thing, and linedef numbers in boldface are secrets which count toward the end-of-level tally.

Flip the switch in front of you to lower a wall then head forward past some spectres to a door at the end of a wide tunnel. Open the door and take an armor pickup if you need it, then go forward to find a plasma gun and rocket launcher guarded by some shotgun guys. When you approach the weapons, the north wall will lower and reveal a spiderdemon standing on a platform surrounded by several barons of Hell - on Ultra-Violence and Nightmare skill levels, there will also be two cyberdemons standing in raised alcoves inside the east and west walls.

Head round to the north side of the platform where you can get on some curved steps leading up to the platform; at the top you will find a megaarmor and a BFG9000 (which does not appear on Hurt Me Plenty) that you can use to quickly kill the spiderdemon. Having killed this enemy, take the supercharge behind it then press the skull switch to open a door below and reveal six barons guarding a yellow keycard. After killing the barons (the key does not need to be collected), return to the curved hallway and head west to find that a silver wall has lowered revealing two yellow key doors; when you approach the doors, you will be teleported into a death-trap and the level will automatically end.

As soon as the level starts, open the door on your right to find two shotgun guys guarding a shotgun, a chaingun, a backpack, a box of bullets and a box of shotgun shells.

* The vertex count without the effect of node building is 449.