E1M8: Persepolis is the eighth and final map in episode The Ruins of Parthala of Heretic Upstart Mapping Project. It was designed by Tom Jensen (HexenMapper) and uses the music track "Ded" by Kevin Schilder. 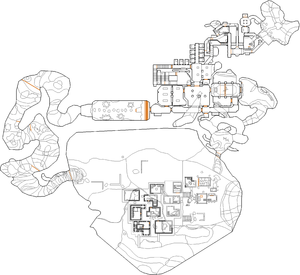 Map of Persepolis
Letters in italics refer to marked spots on the map. Sector, thing, and linedef numbers in boldface are secrets which count toward the end-of-level tally.

Go to the rubble in front of you and take a left to confront an overhead gargoyle, then follow the path north until you reach a door with a window next to it (you can see a golem and a Claw Orb through the window). Go through the door and turn right, head up to the top of the staircase and run forward to land on the building to the north where a golem and nitrogolem guard Gauntlets of the Necromancer. Head up the staircase in the north-east corner and run across to the south-east building, pass a gargoyle and head down another staircase to dispose of one or two more golems before running north to a structure with a Crystal Geode. Go up some steps and turn right to kill an approaching golem and fire gargoyle, then run east across the top of the next building to reach a ruined structure with a Timebomb of the Ancients and an Energy Orb. The structure will collapse into the lava as you land on it - run east until you reach an island with an Ethereal Crossbow, then head north to find some steps with a Dragon Claw on them (plus a Mystic Urn on bringest them oneth (BTO) skill level or lower).

Kill one or two ophidians blocking your way then approach the gray wall behind them - the wall will lower and reveal a lava cavern with golems and weredragons. Head north-east up some steps to reach an outdoor area with golems and disciples of D'Sparil, then head west to a door that leads inside the main building. You will be in a hall with an altar holding a Hellstaff, a Tome of Power and (on BTO or lower) a Mystic Urn - as you approach the altar the walls on either side will lower to reveal undead warriors and golems, along with ophidians on BTO or higher. Exit the hall through the door in the south-east corner and follow the hallway past a weredragon until you reach the end and find two more silver doors, then open the north door to find a room with more undead warriors, golems and ophidians. Go to the north side of the room to find a tan alcove and step into it - the floor will lower, revealing two alcoves containing a Tome of Power and (depending on skill level) a Mystic Urn, Quartz Flask or Timebomb of the Ancients as it does so. Once you reach the bottom, destroy all the approaching monsters then head north into a dark tunnel with cells on either side - the second cell on the right contains the blue key along with a weredragon.

With the blue key, head back into the previous room where a wall in the north-east corner has lowered to reveal a new passage. Follow the passage until you see an opening in the left-hand wall that has one or two sabreclaws waiting behind it, then go into this opening and follow the path until a wall lowers on your right to reveal two or three weredragons guarding a switch that will lower the wall ahead. Head past the wall and kill one or two more weredragons that are revealed behind a wall on your left, then go into a chamber with undead warriors and sabreclaws next to a switch (pressing it is optional). Continue east and go round the corner to confront one or more sabreclaws and a disciple, then walk south until you see a doorway on your left - use caution as there is a crusher trap just behind it. Head east past the crusher and follow the passage past a golem ghost or ophidian (watching out for golems or weredragons appearing behind you), and when you reach the end turn left and run over a lava river and some rock platforms to reach another tunnel.

Follow the tunnel round to a cavern with an ornate column and try to open the south door - the column will lower and reveal an iron lich, along with some golems who appear from behind the north wall. Go into the golems' alcove to make a switch rise from the floor, press it then go through the door you just tried to open and follow the hallway past one or more ophidians to a room that contains more ophidians and a disciple. Press the switch by the opening in the west wall and you will see a staircase rise through the opening; backtrack until you pass the crusher trap again then turn right and follow the hallway until you see the staircase you just raised on your left. Follow it up to the green key.

Retrace your steps to where you found the blue key and open the green key door in the west wall to confront one or more weredragons, then push past the weredragons to another door and follow it to a winding staircase guarded by undead warriors and fire gargoyles. At the top of the staircase is a room containing two ophidians and two golems; walk past them and enter the short passage in the south-west corner to find the yellow key. With this key, go through the door in the south-east corner of the room to return to an earlier area then open the blue key door on your right - make sure to look left as you enter the next room as an iron lich and one or two disciples will be waiting. Press the switch in the middle of the west wall to lower the gray walls on either side and reveal one or two more liches along with some golems, then proceed through the south door to confront three sabreclaws and an ophidian (there are also two undead warriors hiding behind the mural on the south wall).

Head through the next door to the west to enter what looks like an empty hall, but when you move forward most of the floor will drop away leaving only a series of platforms. When you run across the platforms they will all start to descend - drop to the floor below, avoiding any lava pools, and wait for the far wall to lower so you can escape (it has four Piles of Mace Spheres on it, and possibly a Firemace as well). Behind the wall is a winding canyon guarded by various monsters; as you climb up towards ground level, watch out for lava pools forming ahead of you. Once you get back to ground level and see the ruined city from the start of the level ahead, carefully step across the low walls in front of you to get back to the starting area then retrace your path through the city, watching out for gargoyles that have teleported in as well as an iron lich on BTO or higher and disciples on thou art a smite-meister. When you reach the eastern-most building you will see that it has a yellow key door on its north side; open the door and kill the golems and ophidians behind it, then go up the stairs to reach the exit teleporter.

There is a Map Scroll near the top of the canyon leading back to the ruined city; you can reach it by dropping down from the ledge above.

* The vertex count without the effect of node building is 7788.