E1M8: Phobos Anomaly is the eighth and final map of Knee-Deep in the Dead in Doom, featuring a boss battle with two barons of Hell (which are often named bruiser brothers). It was designed by Sandy Petersen and Tom Hall and uses the music track "Sign Of Evil". 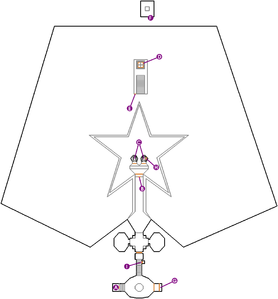 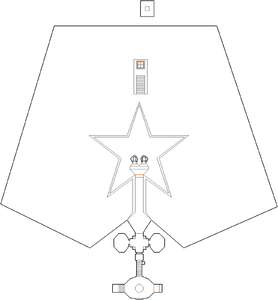 Map of Phobos Anomaly
Letters in italics refer to marked spots on the map. Sector, thing, and linedef numbers in boldface are secrets which count toward the end-of-level tally.

From the start point (A), walk forward and click the switch to lower the brick wall. Jump down into the oval room, then take the staircase to your left (north) and proceed through the gray door, down the central hallway to a square button (B). This button lowers an elevator which leads to a large star-shaped room, at the center of which are two rectangular, tomb-like structures (C).

As you leave the red alcove the two structures will open, each revealing a baron of Hell. There are also ten spectres here, two in each corner of the star; these are difficult to see because the room is fairly dark and has a speckled floor texture. To progress, the barons must be slain.

This is easiest if you have a rocket launcher from a previous level, although you should watch for spectres cutting in front of you and subjecting you to blast damage. Otherwise, note that the chaingun has a higher rate of damage than the shotgun, which gives the monsters less time to corner you. If you run low on ammunition, the corners of the star contain four boxes of bullets and a box of shells (as well as a shotgun, two medikits, a stimpack, and a partial invisibility artifact). Each "tomb" also contains a box of bullets.

When both barons have died, the walls of the star will slowly lower, revealing a huge courtyard outside. At the north end of this is a marble-textured teleporter pad on a gray platform (D), which is invisible on the automap. Pull the switch at the base (E) to raise its stairs, and ascend to the teleporter. This deposits you in a pitch-dark, small and inescapable room with a pack of monsters around you and a damaging floor under your feet (F). As soon as your health drops to 10% or lower, the level ends.

The oval room contains a number of barrels, which surround four demons (I'm too young to die and Hey, not too rough) or eight demons (Hurt me plenty), or twelve demons (UV and NM). It is possible to clear the entire room with barrel frags, though usually at least one or two demons will survive. For a single chain reaction which destroys every barrel, aim at the leftmost or rightmost barrel you can see, not at the barrel closest to the start point.

At the eastern end of the oval room, you can ride a slow-moving lift up to a ledge (G) containing a computer area map, a box of bullets, and ten stimpacks. If you exit the lift while it is fully lowered, however, it will rise without you, blocking the ledge permanently.

Once you jump down into the outer courtyard, you cannot return to earlier sections of the level.

Demons and spectres who outlive the barons may enter the outer courtyard by stepping onto the star-shaped wall as it lowers, especially with fast monsters. Watch out for these while waiting for the stairs to rise.

On each skill level, the last room contains six shotgun guys, five imps, and four demons. Although these can very occasionally be defeated using a rocket launcher [1] [2], or in ITYTD using the chaingun (because all player damage is halved), the room essentially functions as a "special effect" whereby 100% kills is sacrificed in favor of plot development. As a result, a kill percentage as low as 28% (ITYTD and HNTR), 44% (HMP), or 63% (UV) can be considered maximal. In a real game, of course, the number will be somewhat higher due to infighting, unless the player is nearly dead before he teleports.

The blockmap bug can be triggered by attacks directed:

After the walls of the star have been lowered, examination of its inner corners may reveal a handful of bad seg angles (see screen shots below).

In a straight speedrun, the most efficient strategy is to incite infighting between a baron and a spectre, then use the chaingun on the baron. The baron fires fewer plasma bolts because he is being bitten, yet refuses to face the spectre because he is being shot, so he continues to take damage at an increased rate. (With fast monsters, the spectre attacks so frequently that the baron can hardly move.) A few players instead advocate taking cover in one of the "tombs", possibly using the hidden compartment to sidestep incoming plasma, though luck plays a far more significant role in that case. [3] [4]

The shotguns on this map are generally ignored, simply because the chaingun does damage more rapidly and is more readily replenished in the star room.

Wallrunning is commonly used in the passage leading to the star room.

For NM speed, it is important to shoot at the pursuing demons after pressing the elevator button, or at least lunge briefly into their melee range, so that no demon can cause several seconds' delay by becoming caught on the edge of the platform. Some pacifist recordings simply weave back and forth on the platform, so that the demons do not approach in a straight line.

In the NM100S style, you must kill the demons in the oval room in order to avoid being surrounded as you collect the secret. Jochen Schneidau (Angus) has introduced two innovations which turn the demons' increased speed against them:

The whole issue can of course be circumvented in an episode run by using rockets. [7]

In every category save pacifist, the fastest Compet-N runs purposely take a lot of damage in the star room, which speeds up the exit area. Extensive trial and error actually allowed the current UV speed record holder to leave the level instantly. [8]

By straferunning, it is possible to jump directly from the star room to the top of the teleporter structure, bypassing the delay while the stairs rise. The player must jump just as the top of the lowering wall meets the level of the red floor, in effect extending it out further. This trick is credited to Matthias Belz. [9] [10]

When recording in a maxkills style, most players thin out the crowd of spectres immediately with barrel frags, by hiding in the northwest corner of the star until they gather nearby. This tactic can also help in NM, and sometimes even in UV speed, to gain maneuvering space and discourage later ambushes. (In an episode run, it also helps protect you from your own rockets. [11])

Due to the low damage rate of the pistol, Tyson runs are sped up considerably when one or both barons are wounded by exploding barrels. The current record holder combined this with infighting between the barons (carefully luring one baron in amongst the barrels while the other baron shoots at them), which was pioneered by Patrick Martin's initial Compet-N submission. [12]

Pacifist runs begin by encouraging infighting between the barons as above, then use the hidden switch to bring in demons on the elevator until they eventually kill the remaining baron.

When the player is positioned at one of the two southern points of the star room, the spectres cannot get close enough to attack. This can be exploited in any category to encourage infighting, but it is especially useful in Tyson and pacifist recordings: if the player detours to the southwest corner on his way to the barrels, the barons are far more likely to leave their platform promptly.

In Compet-N episode runs, this map is always played very differently from its single-level counterparts, and from the other levels in the movie. Because the judges do not take elapsed time into account, survival is essentially the only goal; nearly all of the above tricks are discarded as being too aggressive.

* The vertex count without the effect of node building is 264.

Having the walls lower when the last boss has been killed is a special effect built into the Doom engine. The sector(s) to be lowered are given the special tag of 666. Because the level uses this effect, and there was no other way around the walls, it was thought impossible to complete the level in -nomonsters mode (except by cheating), but on July 31, 2020, Zero Master found a void glide that allows you to go through one of the lowering walls without the need of a monster.[1]

The damaging floor in the last room is a special sector type (11), more specialized than the usual damaging floors. It ends the level when health is sufficiently depleted. To stack the odds further, the player is confined to the center of the room by impassable linedefs, so that they cannot set their back against a corner.

An early version of this level appeared as E1M12 of Doom v0.5, where it was known as Anomaly.

The level's layout resembles Liberty Island in New York, although it is not clear whether this is intentional.

The official French name of this level is Anomalie Phobos.