E1M8: Tower of Darkness is the eighth and final map in episode The Dark Tower of Masters of Chaos. It was designed by Caleb26 and uses the Hexen music track "Fooja". 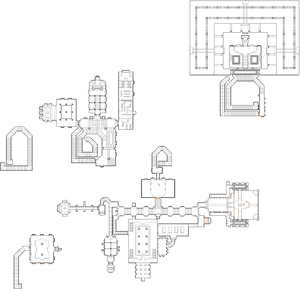 Map of Tower of Darkness
Letters in italics refer to marked spots on the map. Sector, thing, and linedef numbers in boldface are secrets which count toward the end-of-level tally.

Slay the golems in front of you and head forward into a gray hallway. Turn right and head to the end of the corridor (collecting an Ethereal Crossbow on the way) where you will find two doors; take the Discs of Repulsion and go through the left-hand door, following the staircase down to a wooden door. Go through it to a large room with a lava pool, which contains numerous enemies.

Fight or avoid the enemies as you see fit and go up either of the southern staircases, then go south into a chamber with many gray pillars. Take the Bag of Holding and Frost Fang in this chamber, then press the switch in the south wall. The pillars behind you will lower to reveal four undead warriors as well as ammo - dispatch the warriors, then head north across the room and climb another staircase which has been raised.

On reaching the top of the staircase, a wall will lower in front of you revealing a Tome of Power - take the item and press the skull wall behind it, which will open this wall and a wall across the hallway. Slay the gargoyles that are revealed and press the switch in their alcove, behind some Greater Runes. Step out of the alcove and look west to see that the north-west door has opened; slay the disciple of D'Sparil that has appeared here and go through the door you just opened.

Turn left and head south down a staircase past some sabreclaws, leading to a room with wooden supports. Head through the room and open the door at the south end, revealing a small chamber with a stone slab. Kill the undead warrior ghost behind the slab and press the switch it was guarding. This will lower the slab to reveal a Morph Ovum, and release several disciples into the previous room.

Backtrack to the gray hallway and travel to its east end this time, collecting a Dragon Claw on the way. Go through the right-hand door which was opened by the earlier switch and follow the passage to a rectangular stone room. Go to the south side of this room and follow another staircase down. Kill any enemies waiting in the next chamber, then press the switch to open the final door in the gray hallway. Backtrack there, watching out for nitrogolems, weredragons and undead warriors that have been released into the area.

After passing through the door back to the gray hallway, turn right to go through the door you just opened which leads to a wooden bridge over highly damaging sludge. Cross the bridge and walk carefully up the steps to a stone platform - some of the sludge pits here are inescapable, so have a Chaos Device ready to teleport out if you own one. Press the switch on the metal pillar in front of you to raise a bridge to the south, then cross it to enter a room with three undead warriors. Turn right and follow the passage ahead past some nitrogolem ghosts and press the switch at the end.

Backtrack to the stone platform, watching out for disciples which have teleported in, and go across the north bridge this time to another room. Turn left and follow the passage here, pressing another switch at the end. Backtrack to the stone platform, getting past some sabreclaws on the way, and head east across a third bridge to collect the yellow key. This will release two more disciples and lower a teleporter behind you - step into it to leave the area.

The teleporter puts you in an alcove adjoining the gray hallway - collect the Energy Orb and Timebombs of the Ancients then open the north wall. Go forward to find a Bormereth waiting in the starting area. Destroy it, then open the north door ahead which is flanked by yellow key gizmos to enter the tower proper. Slay the nitrogolems waiting behind the door and climb the spiral staircase to the second floor.

There are three rooms leading away from the second-floor landing, but go through the north-east doorway first to enter a library. Watching out for sabreclaws, make your way north through the bookcases (use the automap to help you) until you pass through a doorway, then keep heading north to climb up a set of wooden steps. Destroy the nitrogolems waiting at the top and press the switch in the east wall. The nearby bookcase will lower to reveal three disciples; deal with them and return to the landing.

Go through the north doorway now to enter a room with a red floor. Head north and climb either of the stone staircases to the top, slay the ophidian and undead warriors waiting here and press the switch next to the Hellstaff; this switch and the previous switch will allow you to collect the blue key. Return to the landing, and when you return there watch out for disciples which have been released from alcoves.

Go west into a third doorway which leads to a room with round columns. Dispatch the sabreclaws in this room, then head west to a chamber containing the blue key. Stepping on the key's platform opens three alcoves containing disciples, and taking the key causes a number of golems, ophidians and an undead warrior to teleport in to the landing.

With all enemies destroyed, return to the landing and head south past the stairs you used earlier until you find a door with a blue key gizmo - open it and follow the spiral staircase up to the third floor. Step off the staircase and kill the undead warriors waiting here, then go east or west through a doorway to a walkway over a lava pit. Follow the walkway round to its north side, then cross the wooden bridge here to a platform with two chaos serpents and (if it has spawned) a firemace. Press the switch here, then go back to the staircase to find that door has opened in the north wall.

Go through the now-open door and climb the steps to an area with undead warriors, then go north into a small metal chamber where the green key is located. The wall ahead will lower to reveal disciples when you approach the key, and actually taking the key causes a number of sabreclaws, nitrogolems and undead warriors to teleport into the staircase area.

Go back to the staircase area and defeat the enemies that have appeared here, then head south-west up some more steps to an area with undead warriors, plus numerous gargoyles hiding in alcoves. Clear them out then head south to the end of the passage to find an Energy Orb, as well as a door with a blue key gizmo. Open the door and climb the staircase up to the top floor, opening the silver door ahead. Go around the gray stone wall in front of you to its east side, where you will find a switch. Collect all the ammo and prepare your weapons and artifacts before pressing the switch, as it will lower the stone wall to reveal two to four iron liches (depending on skill level) and a black lich known as the Sentinel. The Sentinel uses a number of projectile attacks and will summon Guardian Cubes to fight alongside it; Tomes of Power and Rings of Invincibility will be useful here.

Once the Sentinel is destroyed, the entire room will quake and a set of bars to the east will lower. Go through them and step into the portal behind to finish the episode.

After going through the north-west door from the gray hallway, go straight forward down a curved staircase. The passage here leads to a Phoenix Rod, behind three crushing ceilings. Watch out for the weredragons and golems that are released around you when you take the weapon; try luring them under the crushers to save ammo.

The walkway on the third floor has bridges on its east and west sides, leading to switches that open additional doors by the third-floor landing. The west door leads to a Shadowsphere, while the east door holds four Claw Orbs and a Crystal Geode. Watch out for weredragons guarding both these areas.

* The vertex count without the effect of node building is 4359.