E1M8: Transport Facility is the eighth and final map of Knee-Deep in the Dead in Doom the Way id Did. It was designed by Jacob Zuchowski (ellmo) in the style of Sandy Petersen and features a boss battle with either two or three barons of Hell, depending on the skill level. The par time defined in the DEHACKED lump is 2:00. 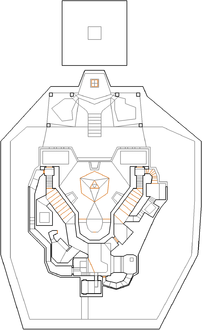 Map of Transport Facility
Letters in italics refer to marked spots on the map. Sector, thing, and linedef numbers in boldface are secrets which count toward the end-of-level tally.

If you plan on taking the upper route, use the lift, then climb the stairs and jump across to the other end of the balcony. You can grab a few health bonuses here. Go through this path and take the door to the northeast. In front of you lies an armor and in the side areas lies a chaingun, ammo, and a backpack. Take all that is needed then enter the door at the end of the path, which leads to the same arena as the other passage.

In the main arena you will have to first deal with imps, spectres and demons. When you are ready, head around the structure to the south and flip the switch there. This lowers the structure, and in the middle is an evil eye. Approach this eye to reveal three barons around you. When you kill them, the northern walls will lower. You will see a staircase leading down to a demonic pentagram teleporter. Enter this one, and spectres will bite you until your health reaches 11% or lower and then the level ends.

* The vertex count without the effect of node building is 680.