E1M8 is the eighth and final map of Nuke Mine. It was designed by Jason Hargreaves and uses the music track " ". 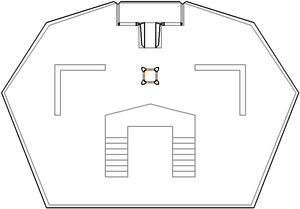 Map of E1M8
Letters in italics refer to marked spots on the map. Sector numbers in boldface are secrets which count toward the end-of-level tally.

When playing this map in Ultimate Doom (or -complevel 3 of PrBoom+), this map can only be completed legitimately on Ultra-Violence or higher. This is because of the 666 tags requiring the killing of two barons of Hell, which are only present on those skill levels. With earlier versions of Doom, or -complevel 2 of PrBoom+, killing the spiderdemon will also cause the walls surrounding the exit to lower, so the level can be completed on all skills.

* The vertex count without the effect of node building is 167.