E1M9: Bleeding is the ninth, and first secret, map in episode The Dark Tower of Masters of Chaos. It was designed by Doom_Warrior and uses the Hexen music track "Stalker". 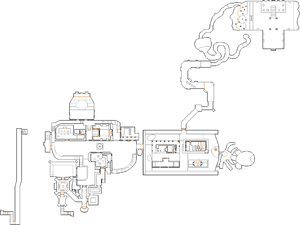 Map of Bleeding
Letters in italics refer to marked spots on the map. Sector, thing, and linedef numbers in boldface are secrets which count toward the end-of-level tally.

Head straight forward to the silver door in front of you and go through it. Go past the stone wall in front of you (there is an Ethereal Crossbow in a nook on your right if you need one) and step into an area with a stone floor. Turn right and go past a fountain, and once you are past the wood building look right to see a curved staircase running down along the wall. Go down the stairs into a dark room with a ghost nitrogolem, then ride the lift behind it and defeat one or two sabreclaws. Head through into the next room and press the switch here. Step into the teleporter behind you to return to an earlier area.

Go through the silver door in front of you, which leads back to the starting hallway where some golems have appeared. Look at the doorway opposite the door flanked by yellow key gizmos - there is a narrow passage going north with a now-open door. Go through and climb the stairs, clear out one or two fire gargoyles and ride the lift ahead upwards. In the next area, dispatch the nitrogolems and undead warriors (there is a wind effect here which can push away some weapons) and head north down some steps, following the walkway round to a stone door.

Open the door and destroy the wendigos behind it, then climb the steps and head through a wooden door to go back outside. Climb some more steps, go around the corner and destroy the three sabreclaws ahead; before going through the door they were guarding, use the window next to it to destroy any waiting sabreclaws, disciples of D'Sparil and ophidians. Go into the room and go down the steps ahead to find two alcoves containing a Phoenix Rod and a Ring of Invincibility. When you approach the items, a floor behind you will lower to reveal two iron liches; destroy them and take the items around them, including a Silver Shield and a Mystic Urn.

Go through the door in the south-east corner and take the yellow key directly ahead, sitting on a teleporter. It will send you to the outdoor area north of the start point.

Go through the silver door in front of you, and this time open the door with yellow key gizmos on your left. Head north through two chambers, dispatching any enemies in your path, and you will come to a hallway leading to a silver door; approach it and destroy the two wendigos that try to ambush you from behind, then go through the door to a dark room with stone pillars. Pass between the pillars to find a switch in the north-west corner, but do not press it immediately; when you approach the switch, the pillars will lower to reveal different enemies. Once they are dealt with, press the switch.

Now backtrack to the start point and go west through the hallway opposite the yellow door, which leads to a chamber with a Tome of Power (if you have not collected it already). Collect it and destroy the undead warriors, then take the other pickups (including a Silver Shield and a Bag of Holding) before going through the south door. Fight or avoid the enemies in the next room and head south into a previously-barred staircase.

Follow the staircase down to a tunnel filled with damaging sludge. Head due north, clearing any pods and gargoyles blocking the way, and duck into the doorway on your right at the end. Lower the lift to be carried up to an area under the ledge that held the yellow key; turn right and you will see that the area with the fountain has changed to sludge. Go through the door on your right, leading to a room with bookcases. Lower the lift behind the bookcases, then ride it up and turn right to find the blue key in front of you.

After taking the blue key, drop down to the floor below and go back through the door you used earlier. In front of you on the left is a blue key gizmo; go through either door next to it to enter a room guarded by ghost nitrogolems, green chaos serpents and one or two ophidians. Lower the lift by the east wall and ride it up to a teleporter, which will put you on a ledge dividing the west and east sides of the level.

Step forward to drop off the ledge, then head straight forward through the covered area ahead. You will see a set of stone steps; climb up them (there is a wind effect here which can push you off) and crouch down to pass under the low openings on your left. Go through the north-east door and head straight forward; a wall will lower in front of you and reveal a magma pool. Step into the middle of the pool to be teleported elsewhere.

Defeat any waiting enemies and step on to the stone ledge outside, following it east to a switch which you should press. This will lower a walled area to the south-east and reveal an octagonal stone structure. Go to this structure and lower the lift on its north side, taking you up to a teleporter guarded by disciples. Step into the teleporter to enter an area filled with dangerous lava. If you have a Ring of Invincibility, activate it now.

Step into the lava and turn left, then head straight forward to the green key which is sitting on a round platform. Stepping on the platform lowers a wall to the east revealing chaos serpents; there is another chamber behind them holding ammo and a Chaos Device, which are worth obtaining if invincibility is still active. Be aware of the weredragons guarding this cavern.

With the green key, head west to an opening leading back outside. Turn right and head around the brick building, then turn left and follow the wall until you see a door flanked by green key markers. Follow the passage to a silver room with three sabreclaws and three Discs of Repulsion, then head east and turn left to see a lit alcove with a hanging corpse. When you turn the corner, four pillars will lower to reveal a number of undead warriors. Go round two more corners to be confronted by ghost golems, joined by an iron lich on hard skill level or an ophidian on easy and medium.

With the enemies destroyed, head forward into a rock tunnel. Follow it and go straight on when the path splits (going right leads to two Timebombs of the Ancients, but watch out for the inescapable pit behind them), and clear any gargoyles that get in your way until you reach a water pool. Go through the pool and keep following the tunnel until you get outside, landing in an area resembling the end of the previous level. Head west into the forest to finish the level and go on to E1M5: Forest of Silence.

From the start, go into the hallway on your left to a room containing a Tome of Power, a Silver Shield and a Bag of Holding. If you go through the north door, you will enter a large chamber containing numerous enemies. Turn left and ride the left ahead to get to the upper floor, then follow the walkway round to collect three Quartz Flasks and a Dragon Claw.

After going east past the fountain, look left to see a door flanked by serpent torches. Go through and press the switch in the north-east corner of the room behind to raise a staircase; at the top are two ophidians and (if it has spawned) a Firemace. If you go through the door here, you can climb the stone steps to find a Morph Ovum and drop to the floor below to find two Timebombs of the Ancients.

After dropping into the east side of the level, you can enter the south-west building in this area to find a wooden area with two Greater Runes; approaching them will open the wall behind you, releasing a number of nitrogolems and chaos serpents. In the same area, navigating the ledge around the north-east building will lead you to a Mystic Urn and a Tome of Power at its ends.

The lower texture of the lift before the teleporter to the green key (linedef 1867) does not move when the lift lowers and rises, due to the line being incorrectly flagged as lower unpegged.

* The vertex count without the effect of node building is 2333.