E1M9: For Hell Cried Lead (No Sleep for the Dead)

E1M9: For Hell Cried Lead is the ninth and secret map of No Sleep for the Dead. It was designed by Jan Van der Veken and uses the music track "The Demon's Dead" by Bobby Prince. 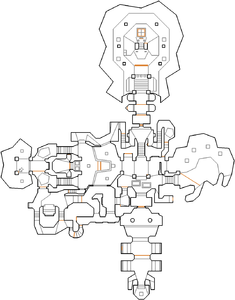 Map of For Hell Cried Lead
Letters in italics refer to marked spots on the map. Sector, thing, and linedef numbers in boldface are secrets which count toward the end-of-level tally.

As soon as the level starts, blow up the barrels in front of you to kill the approaching demons then head forward to collect a berserk pack. As you approach the item, platforms on either side of the room holding imps will lower - look at the platform west of the berserk to see a switch and throw it to lower a wall next to the start point. Kill the spectres that emerge from behind the wall and take the red keycard they were guarding, then head north until you reach a door with red key markings. Open it, kill the waiting demon that appears on Hurt Me Plenty (HMP) skill level or higher and head through to an area with a nukage pool.

Kill any approaching zombiemen and shotgun guys then go round the west side of the nukage to find a switch. Press it to lower a wall behind you, then go through the wall to lower a lift on your right. Ride the lift up to a hallway with a blue floor, kill any waiting monsters then turn right and follow the hallway round to another lift. Step on the lift to be carried down, kill the demons ahead on HMP or higher then turn left to climb some steps. Turn right and follow the passage round past some monsters until you pass through a doorway leading to a marble room.

Head north until you see a wall lower on your left revealing one or two cacodemons, then step into the fenced area they came from and flip the switch on the left-hand pillar which will open two doors to the east. Go through either door and head down the steps to an outdoor area, where a plasma gun can be seen on top of a pillar. Look east to see a yellow skull key on a platform - when you approach the key it will lower out of sight, and the pillar holding the plasma gun will lower. Use the weapon to kill the approaching demons (plus two cacodemons on HMP or higher) then go into the chamber they came from to find another yellow key. Kill any imps that have appeared behind you then backtrack to the area south of the marble room, where a wall has opened in the south-east corner - climb the stairs behind it and take the computer area map at the top, then backtrack to the area past the red key door with the nukage.

Head north across the nukage to a set of stairs. At the top, take the partial invisibility item and head through the exit door to a hallway with barrels, plus a rocket launcher on HMP or lower. As you pass between the barrels you will see some bars close in front of you, and the walls on either side to reveal imps (plus spectres on Ultra-Violence (UV) or Nightmare (NM) skill levels). Kill them then press the switch in the south-west alcove to open the bars ahead, and climb the stairs until you reach three medikits. Kill the cacodemons (and a baron of Hell on HMP or higher) that are revealed when you reach the items, then climb up one more set of stairs and press the gargoyle switch to lower the pillars blocking the exit teleporter.

Armor can be found south of the doorway leading to the marble room.

* The vertex count without the effect of node building is 1226.