Unchecked
This level occupies the map slot E1M9. For other maps which occupy this slot, see Category:E1M9.

E1M9: Haunted Hospital is the first secret map of Strange Aeons, designed by Impie in 2015 and constructed in Doom Builder 2. 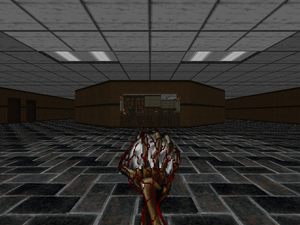 You may have to donate some blood...someone else's.

The three locked doors are accessible from the lobby (your starting point). Beyond the blue door to the far right is the exit slipgate.

North of the lobby is the patients' ward, where you will find the yellow keycard on a bed behind a drawn curtain. Resistance is surprisingly minimal in the hospital: a handful of gunmen with a few Devils outside the windows. Things take a turn for the hellish once you step through the yellow door to the front office, however.

The hospital has changed to a ghastly version of itself: everything is furnished with gore, and Nightmares and Death Incarnates now roam the halls. In this hellish dimension's patient ward you must find the red key and access the surgery room across the hall from the front office, where the blue key is hidden.

Once you step through the blue door, you are suddenly back in the normal hospital, but now the doors randomly open and close as if possessed. Loot the previously inaccessible areas and run to the exit.

Episode 1's Yithian Lightning Gun can be acquired on this level. When you enter the hellish version of the hospital, turn around and examine the message board to open a wormhole in the opposite wall. Quickly jump through before it closes: you'll be teleported to an eerie alien cavern filled with Leng Spiders, which watch you ominously from the ledges above. The Yithian gun rests on a pile of rocks in the middle of the underground pond.

Examine the same message board in the normal hospital for a cache of hidden goodies.