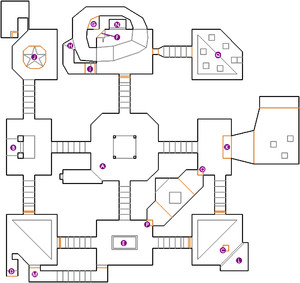 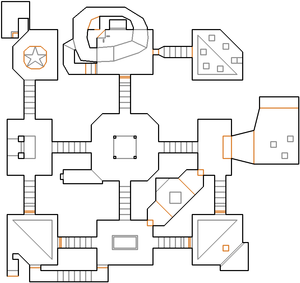 It is possible to jump over the nukage canal in the exit room by straferunning. This trick was invented by Uwe Girlich.[1]

When playing on NM, most players make a detour either to the chaingun or the rocket launcher, in order to clear paths through crowds more quickly. The second method is more dangerous, since it releases fifteen extra monsters, but faster, since the rocket launcher is so powerful.[2]

For styles requiring 100% kills, the most efficient approach is to ignore the monsters in the central courtyard, then run in and out of the rocket launcher room after getting the yellow key. By the time you clear the red key room, most of these monsters will have collected at the foot of the staircase to your west. (Because of the open layout of the level, however, this may backfire as monsters wander up to the central courtyard and enter other rooms.) Anders Johnsen credits Yonatan Donner with inventing this route.[3][4]

In NM100S, the fastest way to reach secret #2 is to jump across the nukage canal, shoot the deaf spectres with rockets, then jump back across the canal to the secret door. If you are out of rockets, you can instead run through the secret door immediately, so that only one spectre approaches you at a time. For an episode run, the extra rockets in secret #2 and the extra bullets in secret #1 are both good investments.[5]