E1M9: Nightstone Hollow is the ninth and secret map of Realm of Parthoris. It was designed by James Caldwell (Obsidian) and uses the music track "Plasma," composed for Duke Nukem 3D by Lee Jackson. 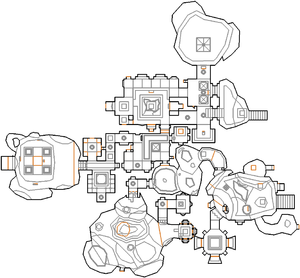 Map of Nightstone Hollow
Letters in italics refer to marked spots on the map. Sector numbers in boldface are secrets which count toward the end-of-level tally.

This level includes three iron liches but no ammo. If you are playing from a wand start and want 100% kills, you will need to use telefrags or lure the liches into blowing up pods to inflict damage.

You start in a cavern with several hidden switches. Go to the south-west corner to find switch #1 and press it to reveal switch #2 in an alcove behind you, then climb some steps to a ledge on the north side of the cavern from where you can shoot that switch. Enter an opening in the south wall to find switch #3 behind a hanging corpse and press it, then go back to the ledge you used to shoot #2 and drop into the hole behind it to shoot switch #4, which is east of a pillar with a teleporter pad on it. Use the lift to get back on the ledge, where you will see that a pool of water containing switch #5 has been revealed. Press this switch to raise the water level in the cavern, allowing you to step on the teleporter you saw earlier.

You will be sent to a ledge on the west side of the cavern - approach the wall in front of you to make it lower then step through to a teleporter pad which will vanish as you approach, then drop into the water area behind it and head down to a square brick room at the middle of the level. Look at the east wall to see a hole with a skull switch and shoot it (you will need this to reach the yellow key later), then ride the moving platform up and go through the silver door in the north wall. You will enter an area with several hidden switches; be careful when walking through this room, as exploding pods will teleport in at regular intervals which can heavily damage or even telefrag you if you stand too close.

Pressing switch #9 will raise the ledge you used to reach the archway to #1; return to that switch and head north across the platforms to reach switch #10. This will lower the pillar holding the blue key, which you can now collect.

Go back to the brick room in the middle of the level and head south down an arched passage; note the four symbols on the wall and the order in which you pass them as you will need to recall this later. Press the switch at the end of the passage to lower a lift, then continue following the passage until you reach two exploding pods; you must stand between the pods to find a hole containing the third and final skull switch that needs to be shot. Head south to a room with a flowing stream then go into a neighboring chamber with four pads - the symbols on the pads match those in the passage you walked through earlier. Quickly stand on the north-west, south-east, south-west and north-east pads then press the switch on the north wall - if done correctly this will lower a set of bars nearby, allowing you to enter a large cavern to the west.

Return to the brick room in the middle of the level and head east to a teleporter; after stepping into it, follow the passage in front of you to a large ice cave. On the east side of this cave is a short passage leading to a chamber with the yellow key high above - if you shot all three skull switches earlier then the yellow key will descend as you walk towards it. Go back into the cavern and look east to see three wall slots with colored tridents, then press twice on each slot to place the keys inside them.

After placing all three keys in their slots, approach the rock in the middle of the cave; it will lower to reveal an iron lich guarding a pool of water. Enter this pool and three waterfalls holding pods will lower that you can use to damage the lich; a fourth waterfall by the south wall will also lower to reveal a switch. Press this switch to reveal a face switch by the wall slot holding the blue key; after pressing that switch, continue to press the other face switches that are revealed until you receive a Chaos Device that you can use to return to the start point. A passage has been revealed behind the south-west wall - enter it and step through any of the blue portals here to finish the level.

On higher skill levels, the number of crystal vials and Quartz Flasks in this level is significantly reduced.

* The vertex count without the effect of node building is 3225.