E1M9: Omgekeerd is the ninth and secret map of episode 1 of Heretic Treasure Chest. It was designed by Lord Z and uses the music track "Sacred Grove" from Hexen, created by Kevin Schilder. 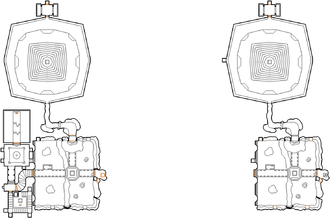 Map of Omgekeerd
Letters in italics refer to marked spots on the map. Sector, thing, and linedef numbers in boldface are secrets which count toward the end-of-level tally.

Open the door and drop to the sky-floor below, where a number of fire gargoyles are guarding a Dragon Claw, Quartz Flasks and ammo. Go through the opening in the south wall to enter a tunnel with nitrogolems, which you can follow to another sky area with more nitrogolems as well as fire gargoyles and disciples of D'Sparil (the tunnel will seal behind you as you exit it). Climb up the lava steps by the west wall to reach an Ethereal Crossbow, then open the door behind it and climb the staircase past some golems to another door with one or two undead warrior ghosts behind it. Open the brown door on your left and head down another staircase guarded by nitrogolems - at the bottom is a water pool with undead warriors guarding a switch.

Press the switch and head back up the stairs, passing alcoves containing (depending on skill level) golem, nitrogolem or undead warrior ghosts, until you return to the brown door at the top. Go through it and head north through another now-open door to a room with golem and nitrogolem ghosts guarding the blue key, then continue north through a gold door to find disciples guarding a switch which will lower the key so you can collect it. Kill the disciples which have been released into the blue key room, then return to the large sky area and open the gold bars in the east wall - behind these bars is a teleporter that will transport you to an "upside-down" version of the same level.

Open the bars and head west towards the door you used earlier to find the blue key - just before you reach the door, enter a small enclosed area on your right to find a Bag of Holding next to a switch which will open the blocked ice tunnel to the north. Enter that tunnel and follow it past some nitrogolems to a circular dirt area guarded by golems and nitrogolems. Collect all the items in this area then open the north door to find a disciple (and undead warrior ghosts on medium and hard skill levels) guarding the exit teleporter.

When you press the switch to lower the blue key, you will also allow enemies in a teleport closet to teleport into the level, landing on the pad in the middle of the southern part of the first area. However, the landing destination is only flagged for thou art a smite-meister or black plague possesses thee skill levels, meaning two golems and up to eight gargoyles will not teleport into the map on lower difficulties.

This level contains four spawn points, all of which are located in the second half of the level:

The following weapons only appear in multiplayer:

* The vertex count without the effect of node building is 2645.